Sydney shock-jock Alan Jones has written to Prime Minister Jacinda Ardern saying he didn't intend any violence towards her when he said on air that Australia's Prime Minister should "shove a sock down [her] throat". 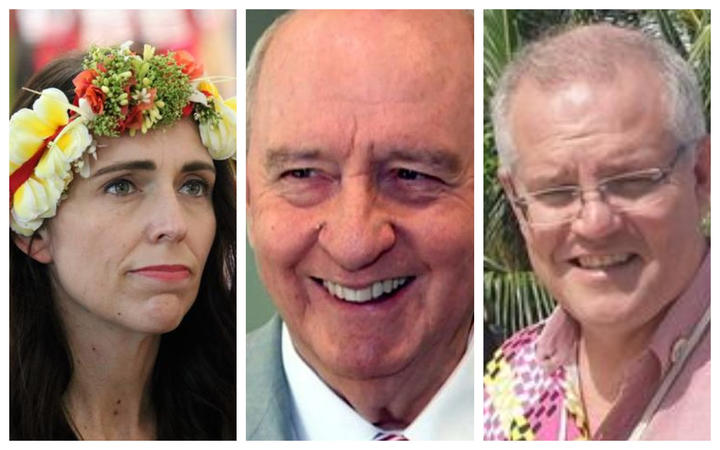 The Prime Minister's office has released the letter which was sent to Ms Ardern on 16 August, which was about the same time Mr Jones was coming under heat from his employer about the comments.

Mr Jones' attack came after Ms Ardern stated that Australia "had to answer to the Pacific" on climate change while in Tuvalu for the Pacific Islands Forum.

He also described Ms Ardern as a "joke" for commenting on climate change, having claimed that New Zealand's carbon dioxide levels had increased per capita more than Australia's since 1990.

In the letter Mr Jones began by addressing Ms Ardern as "my dear Prime Minister'' and went on to extend a standing invitation to do an interview on his show.

"Should you find it beneficial to discuss the matter with me in person, I would be pleased to call you at a convenient time to do so. I would also like to extend a standing invitation to participate in an interview on my program, which would allow us to constructively debate the issue of climate change,'' the letter said.

Mr Jones also pointed out he didn't wish Ms Ardern any harm and while his comment hadn't come out as intended, he had meant to say "put a sock in it''.

"Prime Minister, I would like to assure you that I did not intend to suggest any violence towards you,'' the letter said.

The Prime Minister said she had accepted the apology letter from Mr Jones and moved on.

Ms Ardern said it was a matter for the past.

"I didn't engage at the time, I still don't see it as something I particularly want to draw out. I've received the apology, I've moved on,'' she said.

Ms Ardern is currently in Japan for trade talks and the Rugby World Cup before heading to New York for the United Nations General Assembly.

Ms Ardern said of the comments in Tuvalu: "I don't know that I'm going to give that the light of day. I think I'll just leave it where it is."

Meanwhile, Australian Prime Minister Scott Morrison described the comments as "disappointing" and "way out of line".

"I mean, I have two daughters. So you can expect that's how I would feel personally about it," Mr Morrison said.