A secret briefing on the perilous state of New Plymouth's water pipes has raised the ire of council aspirants in the city. 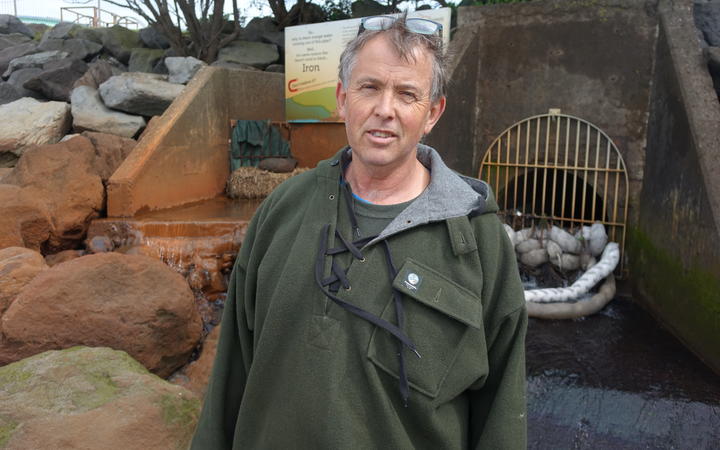 Mayoral candidate Max Brough said incumbent councillors were told at least $300 million extra may need to be spent on the network over the next 10 years.

He said that information should be in the public domain.

New Plymouth's storm, drinking, and waste water system is more the 1700 kilometres long and includes pipes up to 100 years old.

At the briefing, held last month, councillors were told at least a third of the drinking water network needs replacing, and it and other required upgrades far exceed the additional $44 million budgeted for in the long-term plan.

Speaking at the Hongihongi Stream mouth at Ngamotu Beach - the site of the latest sewage spill in the city - Max Brough said the public should have been kept in the loop.

"It was agreed to keep this information from the public and from the other council candidates prior to the election. To me that doesn't sound right.

"I understand the money that is being talked about is over the $300 million mark of improvements and upgrades that have to happen to the water system."

Mr Brough said the secrecy gave incumbent councillors an advantage over their rivals.

"As an incoming mayoralty candidate ... that information wasn't put out to everybody before the election.

"You can't hold back information like that. That's not fair to any candidate that's coming in for what they have to look at. What promises they might make for the future."

Incumbent Mayor Neil Holdom confirmed councillors were briefed because of the likely impact of the government's review of water management.

"In terms of if we wanted our three waters infrastructure to be gold standard, bullet-proof.

"We are talking over the next 15 to 20 years potentially hundreds of millions of dollars of additional investment.

"But this work hasn't been audited. It hasn't peer reviewed and is based on a bunch of assumptions that we haven't been able to test." 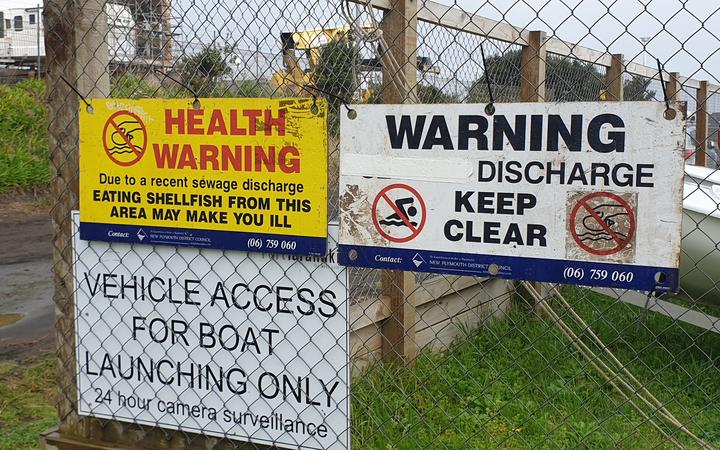 Warning signs were put up at a New Plymouth beach and residents of a nearby suburb told not to flush their toilets after a sewage spill in the city. Photo: RNZ / Robin Martin

Mr Holdom understood why the candidates were questioning why the information was being kept secret.

"Yeah it is a fair question to ask and I mean I suppose the other issue is about well we have confidential briefings all the time at what point is the cut off date?

"But look, I can understand that candidates are scrambling to get information."

Mr Holdom said $613 million was already budgeted for water and flood protection over the next decade but much more was needed.

Max Brough feared the council would set up a company to run water in the city. He preferred a community trust option.

The mayor said setting up a council-owned water company was discussed at the briefing, but that was not necessarily his preferred option.

Aspiring council candidates spoken to by RNZ were unhappy about being left in the dark.

"In the end it's very hard for wannabe councillors to know what the real issues are when meetings like that are held behind closed doors and figures of a celestial nature are kept withheld from us."

Gordon Rees thought it sounded off.

"No, I don't think that's very fair. The council have to be upfront and fair. Simple as that. Be it the mayor or one of the gang it doesn't matter."

Angela Buckland was not happy either.

"It definitely should've been out in the public domain. The people coming in need to know about it so they can have a say about what they are going to do and we also need to know what the council thinks it is going to do."

Voters will get to have their say on who is best suited to oversee the city's water pipes in October.