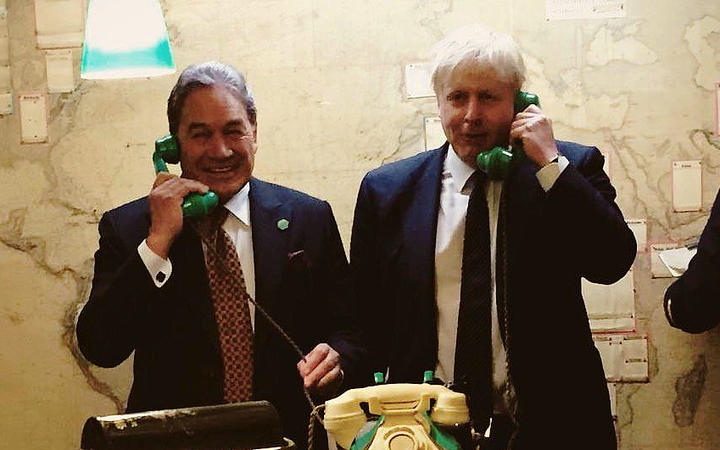 Winston Peters with Boris Johnson at the Churchill war rooms in the UK, before the Commonwealth Heads of Government Meeting 2018. Photo: Twitter / Winston Peters

Former British Foreign Secretary Mr Johnson secured a much higher number of Conservative Party members' votes than his Conservative rival Jeremy Hunt - the current Foreign Minister - in the race to see who would next lead the party. He will be sworn in as Britain's next Prime Minister after midnight tonight New Zealand time.

It came after UK Prime Minister Theresa May's announcement in May that she would resign, following continued pressure over the British government's failure to come to a consensus on how to achieve Brexit, the country's exit from the European Union.

Mr Johnson has long been a supporter of Brexit and helped lead the 'leave" campaign ahead of Britain's 2016 referendum which narrowly voted to quit the EU, and is now vowing to keep his promise to leave by the end of October with or without a deal.

"It means that ... we hit ground running in terms of our future relationship and in that sense - he's been to this country, he's got people he knows here and it's all to the good in that context."

"He respects the fact that since 1854 only nine countries in the whole world have had an unbroken line of democracy and we're one of them - all these things are to the better for this country and if you look at where British Prime Ministers were in the past with respect to New Zealand, many of them didn't have what I call the respect and the affection for a very successful country way out here in the antipodes. Boris Johnson does have that sense of respect and affection."

Mr Peters said that when Mr Johnson stepped down as British Foreign Minister, he had sent a text message to Mr Johnson saying he would be back, "and last night he was back".

"Some of us have known Boris for some time, some of us have believed Brexit was going to happen way before the 23rd of June 2016 and said so."

Mr Peters rejected Treasury and Business New Zealand's statements that a no-deal Brexit - which Mr Johnson has highlighted as a possibility - would not be good for New Zealand because of Britain's lack of infrastructure to handle imports.

He was confident New Zealand stood to gain from Brexit.

"I don't know why we're hearing this sort of misery sort of statement in circumstances which for us in this context represents opportunity both in respect to the UK - and, dare I say it, with the European Union as well.

"The job is to get the infrastructure ready now and we did have infrastructure there for decades since 1882 - just because it went away in the '70s because of the European Union connection with the UK doesn't mean that we don't have the infrastructure, the people on the ground, ready to do the job that we need them to do."

"I've had a positive text exchange with incoming Prime Minister Johnson this morning to congratulate him on his election. He said he was looking forward to working together," she said in a statement.

"Mr Johnson is familiar with New Zealand in his former role as Foreign Secretary and has an excellent relationship with our Foreign Minister that I am sure will be mutually beneficial for our countries.

"New Zealand's relationship with the UK is important to us. Irrespective of the outcome of Brexit, New Zealand will remain a close friend and partner of the United Kingdom and stands ready to launch negotiations towards a free trade agreement when the UK is in a position to do so and I am sure that is something that Mr Johnson will want to discuss.

"Our offices are in the process of scheduling a formal call once he has his feet under the desk at Number 10 and I anticipate I will have the opportunity to meet with Prime Minister Johnson at the UN General Assembly in September to advance trade and other issue of mutual interest."