Police have detailed the process gun owners will have to go through when the firearms collection events begin next week.

Almost 1000 guns have already been handed in to police, and another 8000 have been flagged for surrender through the online registration process.

Over the next six months police are expecting tens of thousands to be handed in and destroyed.

Media will be excluded from entering the collection venues, which is why police set up an open day at Trentham Racecourse on Thursday to explain the process.

Senior Sergeant Braydon Lenihan ran through how the collections will work.

"The first thing that will happen is we'll come to the safe zone," Mr Lenihan said.

"In the safe zone, there are a number of bullet traps, firearms chamber flags, and the first member that they will meet asks them if they've cleared their firearm, assists them to clear their firearm, and makes sure the firearm is safe and clear so that everybody is safe on the site when they carry on through the event."

The gun owner will then be asked where they are in the amnesty process.

Those who are yet to complete an online form detailing their firearms ownership will head to self-service kiosks where they will complete that form.

For those who have completed the form, they will either head to a desk for people using the amnesty, or to the buy-back desk for those seeking compensation.

Handing a gun in under the amnesty will be seamless, but if you're seeking compensation things will take a little longer.

The gun owner will need to agree on the condition of the gun, before handing over their bank account details to organise payment.

The money is expected to come through to a gun owner's account within 10 working days.

With that done, the gun heads towards its final resting place.

Some guns will be disabled on the spot using a hydraulic press, which has been purchased from a family engineering business in Christchurch, while others will head into safe storage.

They will later be transported to a secure location to be melted down or disposed of.

Deputy Commissioner Mike Clement said 15 people were employed to run collection events in each of the 12 police districts.

In total, 108 had been hired as short term contractors, and the rest were existing police staff.

Mr Clement said the staff had no idea how busy they'd be during the first few months of collections.

"Well in actual fact what you've seen here is a team of nine, plus the security," Mr Clement said.

"For Canterbury, on the first occasion on Saturday 13, we will have two teams on location, so we've got a surge capability.

"But the reality is we don't know. We don't really know how many people are going to turn up on that day.

"All we're doing is making sure we're agile enough to meet the demand, and if we're not, we'll change it up to make sure that we are."

Minister of Police Stuart Nash was impressed with what he saw at Trentham Racecourse, and said he expected the collection events to be a success. 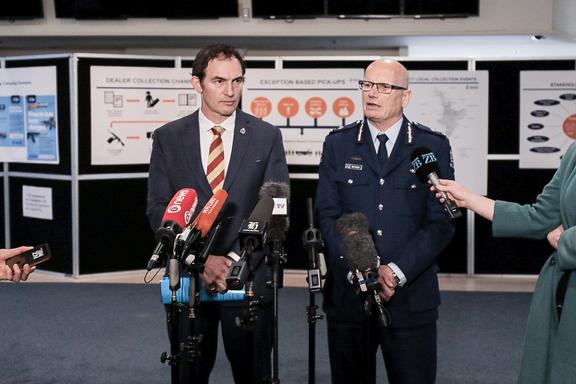 That is despite not knowing how many people would turn out for the events.

"Well as the deputy commissioner said, the police have the ability to surge, so if we find the demand is a lot greater than the officers on duty, then more will come in," Mr Nash said.

"Obviously, the first one at Riccarton is a bit of a test. If in fact it's taking longer than the police expect, they will make sure that the resources are at the next one.

"I have complete confidence in the police to do a fantastic job as they have done in putting the whole process together."

The first of the gun collection events is set for Riccarton Racecourse next weekend.

Nearly 300 further events are planned for the first three months of the collection scheme, with more to be added for later in the year.

Meanwhile, the National Party is concerned that gun-owners will not get a fair deal in the buy-back and is calling on the government to release the report on which the system is based.

National's police spokesperson Brett Hudson said the government-commissioned KPMG report, which recommends how much gun-owners should receive for handing in their firearms, needs to be made public.

Many gun-owners are not confident that the scheme is fair and fear they will be left out of pocket, he said.

Mr Hudson wants the report released so they can see the expert advice and compare it to what is being rolled out in the buyback.