National MP Amy Adams has announced she will retire from politics at the 2020 election.

Watch a live stream of Amy Adams talking about her decision here:

She said as a consequence of that decision she has chosen to stand down from the spokesperson roles she holds in the party.

Fellow National MP Alastair Scott also annnouced this afternoon that he would not contest the 2020 election.

Ms Adams has been the MP for Selwyn since 2008 and is the party's spokesperson for finance and shadow attorney-general.

Ms Adams said making the decision to step away from politics had not been easy but she believed it was the right time for her and her family.

"Ultimately it just came down to the life I wanted to lead for me and my family," she told reporters

She said she had promised herself that the day she thought she could not give politics 100 percent of her passion she would step aside.

After 12 years in politics and more than 16 years in law, at a frenetic pace, she felt she had given everything.

"I want my life back," she said

She said her decision to retire from politics was no reflection on Mr Bridges and was not about the politics. "Simon [Bridges] has my 100 percent support."

Her decision would have been the same whether National was in government or had a different leader, she said.

"I have every confidence in the National Party under Simon Bridges' leadership and their prospects for the 2020 election," her statement said.

"My decision is purely about what is right for me and the life I want to lead going forward." 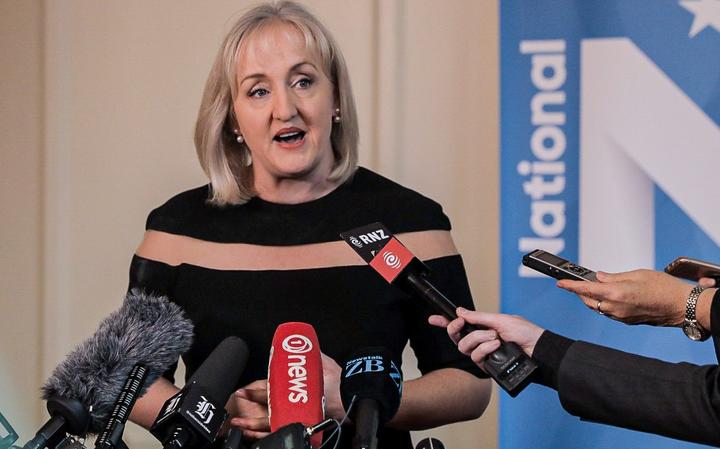 Ms Adams said she'd had Mr Bridges backing to be Finance Minister if she had stayed on, but she was giving up her portfolio responsibilities immediately so other caucus members had time to establish themselves in their new roles in the lead-up to the 2020 election.

"I want National to have a finance spokesperson to lead them into the election."

Finance Minister Grant Robertson said he was surprised to hear his political opponent was stepping down from the role.

Mr Robertson said today was a good day to acknowledge someone who had given more than a decade to public service, including as Social Housing and Justice Minister.

"From a personal level, one thing I'm really appreciative that she did was the expungement of convictions around homosexual acts before law reform," Mr Robertson said.

"I think that was a really brave and courageous thing for ther to do."

He said he was waiting to see who Mr Bridges would put into the finance spokesperson role.

Ms Adams said she would continue to advocate for her electorate.

"From now until the election I will continue to work hard as the advocate for the people of Selwyn."

She said she was looking forward to reconnecting with family "which is an awful thing to say, that you have to reconnect".

They would have continued to back her if she was stay on, but when she told them she was done with politics they were "embarrassingly" excited," she said.

"It kind of makes me feel even worse that they were so stoked."