A group of self-described gender critical feminists, who are against a proposed law change to make it easier for people to change their sex on birth certificates, has welcomed a government decision to defer it. 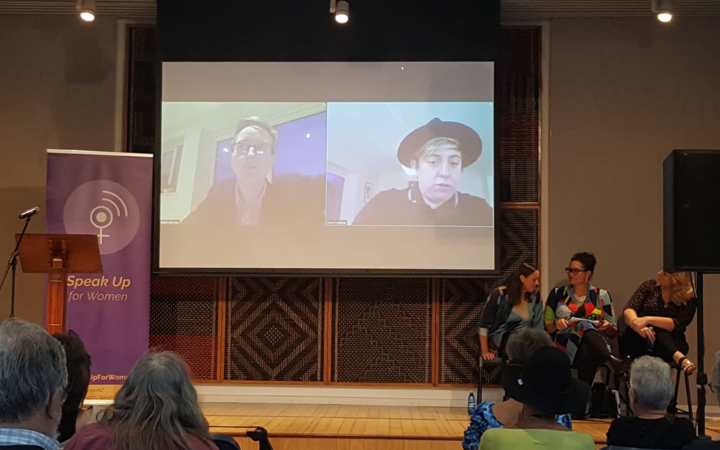 Speak Up For Women held an event in Auckland following the deferral of the Bill. Photo: Twitter / @SpeakUp4WomenNZ

The Births, Deaths, Marriages and Relationships Registration Bill was deferred after a select committee made significant changes, which the Minister of Internal Affairs said had been done without properly consulting the public.

Changes included a clause allowing people to amend the sex on their birth certificate without having to provide medical evidence through the current Family Court process.

Many in the trans community are upset by the deferral, saying the bill is urgently needed.

They say that's because of the difficulties transgender people face when, for example, the sex on photo ID doesn't match their birth certificate.

Speak Up for Women is a group that formed to oppose the bill, arguing the proposed change was undemocratic, and posed questions about the legal definition of 'female'.

On its website, the group denies it is transphobic.

Its spokesperson, Ani O'Brien said the group was happy the bill had been delayed, so proper consultation could take place.

She expected the consultation process would help to work out a balance where transgender people would not face too many barriers, while women's rights didn't suffer.

Ms O'Brien said members were concerned with the idea that a person's sex could be amended on their birth certificate through self-identification.

She said Speak Up for Women believed a person wanting to amend their sex on their birth certificate should be required to provide medical evidence.

But said that did not mean a person would have to get gender reassignment surgery, which she noted was expensive and had a lengthy waiting list.

"It's medical evidence in terms of intent and wellbeing and that kind of thing," Ms O'Brien said.

She said that would include a medical professional finding the person had valid, good and honest reasons for wanting to change their sex on their birth certificate.

Ms O'Brien said aspects of the current Family Court system did need improvement, such as the cost, which some could not afford.

And while she said she supported transgender rights, Ms O'Brien said she wanted to retain some single-sex spaces, where she said only biologically female women would be allowed.

The Internal Affairs Minister has asked officials to examine the following to try and improve the process in the short-term: