A prospective KiwiBuild buyer has highlighted what she sees as an anomaly with the KiwiBuild criteria, preventing her and others from achieving the dream of home ownership. 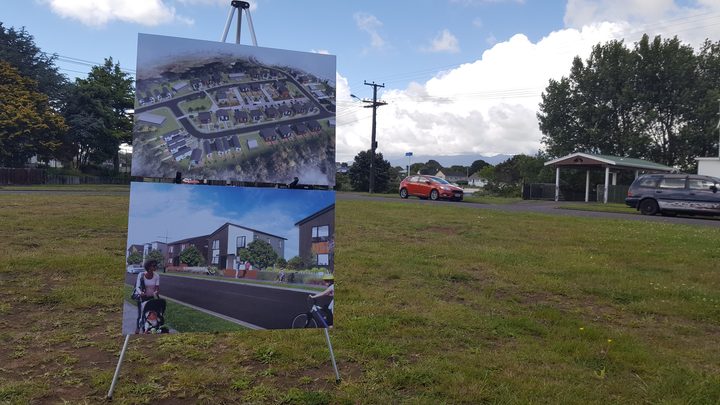 A board displays an artist render of one of the KiwiBuild projects. Photo: RNZ / Robin Martin

The flagship home building programme hit the headlines after the Housing Minister Phil Twyford admitted it was likely they would fail to hit the 1000 home target in the first year, with 300 a more realistic number.

Diana moved to Auckland four years ago and she and her husband started looking at KiwiBuild last year.

With that, the family could just afford a one-bedroom KiwiBuild apartment, about an hour out of the city, she said.

Diana said while they're eligible for KiwiBuild, they earned just too much to get HomeStart.

"That's where there's a mismatch of the criteria in that grant with KiwiBuild income thresholds, so those who are earning over $130,000 get locked out automatically."

It leaves them with some difficult choices, she said.

"For the next 12 months what is our plan? Do we take a pay cut to get into the subsidy but then at the same time trying to have a high enough income to service a mortgage."

She'd like the minister to take a fresh look at some of the criteria, to make sure potential buyers have the best chance at securing a home.

Phil Twyford already has his hands full, fending off opposition attacks and calls for him to be sacked from the portfolio.

But he has the firm backing of the Prime Minister, Jacinda Ardern, who says she still has confidence in her minister.

The acting Prime Minister Winston Peters is striking a note of confidence, saying he believes the 1000 target can be met within the next six months.

"I'm going back to former governments where practical men who'd never been to university, and women, decide they'd get on with the job and get it done."

Ministers would recommit themselves to getting KiwiBuild "back on track" at their first Cabinet meeting of the year, he said.

"We've not given up at all, we've got six months to wind this up as fast as we can, and practically, we will."

However National Party leader Simon Bridges said it was strange the government was at odds with itself over whether Kiwibuild's first-year target of 1000 houses is achievable.

KiwiBuild has updated its numbers today, taking the total of houses completed up from 33 to 47.