Prime Minister Jacinda Ardern says she isn't taking sides in the trade war between the world's two superpowers after tensions ran high at the APEC summit. 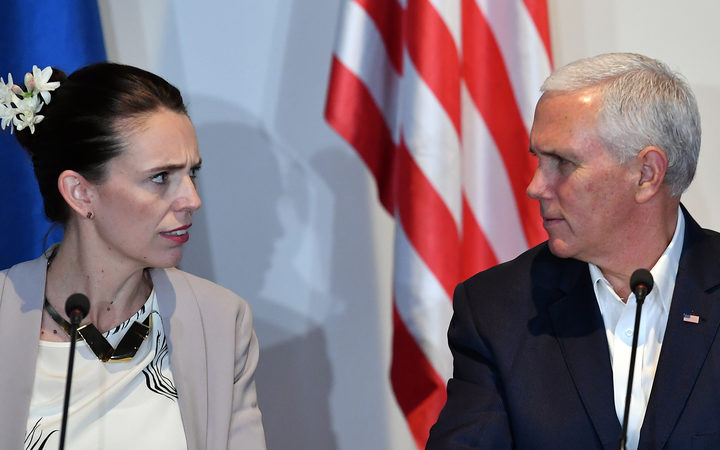 The APEC summit held in Papua New Guinea revealed the deep rifts between the United States and China on trade and security.

The countries at the summit failed to sign a formal leaders' statement because of those divisions.

Ms Ardern, who just returned from Papua New Guinea, told Morning Report that rather than aligning with a certain country, New Zealand's approach was based on principles.

"Our application of our values-based approach actually is what an independent forum policy is all about. For us it's not about picking sides, I think there is an issue with the increasing rhetoric around you're either one lane or the other.

"Some of these issues aren't black and white, but we will always make a decision on issues based on those principles. For instance, we're unashamed multilateralists - we do ask other that countries apply the rules of trade, we do believe with the WTO [World Trade Organisation] is an important forum but we also agree there's a need for reform."

Last week, Trade Minister David Parker said New Zealand could play a role as a bridge between China and the US and be an "honest broker".

Ms Ardern agreed that the country could help broker some of the issues around WTO and reform, which have become pretty contentious.

"No-one here is drawing a comparison about the relative importance of each relationship, rather the role that we can play internationally on a particular issue of global strategic importance, which is trade, and where New Zealand have a good reputation.

"In the area of WTO reform we can play a role, we can act in the interest of trading nations and small island trading nations, rather than a self-interested position, which I do think can make us an honest broker.

"We are a trading nation, we rely on trade and we rely on the predictability of people applying the rules and the rules being applied fairly.

However, she said considering the international dialogue around trade, the divisions did not come as a surprise and there were calls for de-escalation.

"There is a group of people there saying that there is no need for the two major superpowers to sneeze and for the rest of the world to catch a cold."

"There is I think a growing call, not just from New Zealand, but from the other APEC members to say 'let's take a step back, let's de-escalate' because we'll all face the consequences if we do not."

Yesterday, Australia and New Zealand also made a new commitment to cyber security in the Pacific.

It followed the signing of the Boe Declaration by Pacific Island Forum countries in September, which highlighted the need for improved cyber security in the region.

Ms Ardern also highlighted the importance of cyber security for New Zealand but again said it was an issue across the board and not related just to one specific country.

"We've seen for instance in the past that we've called out issues of cybersecurity against North Korea, against Russia, so for me it's not about specific countries... [unless] where it's attributable.

She said there was a need to be cautious and vigilant when pointing out foreign influence.

"When it comes to specific things like the elections, we haven't found evidence there.

"But that doesn't mean that we are naive to the fact that we have to make sure that we have a pretty robust framework to prevent that from being able to occur."