The Asia-Pacific leaders' summit has ended in Papua New Guinea with a flurry of aid and development announcements. 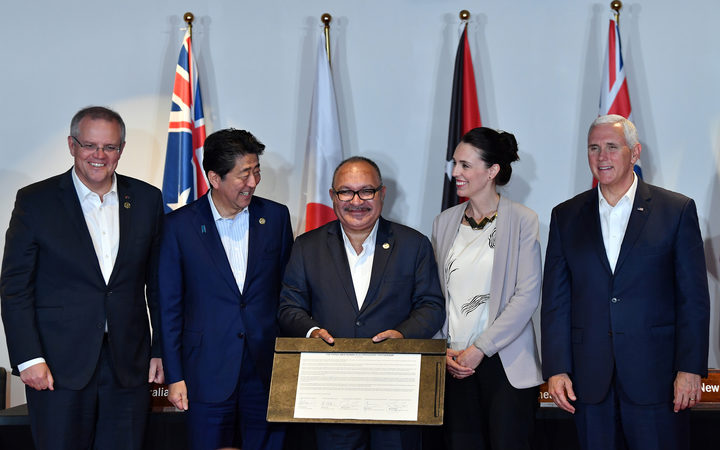 New Zealand has joined Australia, the United States, Japan, and Papua New Guinea in a $1.7 billion project to bring electricity to nearly three quarters of the country. New Zealand is contributing about $20 million, much of which will be in expertise.

She had cut the ribbon to open a fresh produce market in Port Morseby which was rebuilt with $7 million of New Zealand aid.

The summit ended without a formal leaders' statement for the first time because of US-China divisions over trade.

Papua New Guinea's Prime Minister Peter O'Neill said "the two big giants in the room" had been unable to agree.

He said a chairperson's statement for the Asia-Pacific Economic Cooperation (APEC) summit would be released later.

The US and China are engaged in trade war and revealed competing visions for the region at the summit.

In his closing comments, Mr O'Neill said Apec would try to ensure "free and open trade" in the region by 2020.

During the summit, the US said it would join Australia in developing a naval base in Papua New Guinea (PNG), in an apparent move to curb China's growing influence.

US Vice-President Mike Pence said the base would help "protect sovereignty and maritime rights in the Pacific islands".

On Saturday Chinese President Xi Jinping took a swipe at the US's America First policy by saying that countries that embraced protectionism were "doomed to failure".

Mr Pence later said he was prepared to "more than double" the tariffs imposed on Chinese goods.

He urged countries to work with the US instead, saying the US did not "coerce, corrupt or compromise your independence".

Mr Xi insisted that there was no "hidden agenda" to the Belt and Road scheme.