Analysis - You know a political party is in trouble when it's pleased with a poll showing it has lost two points. 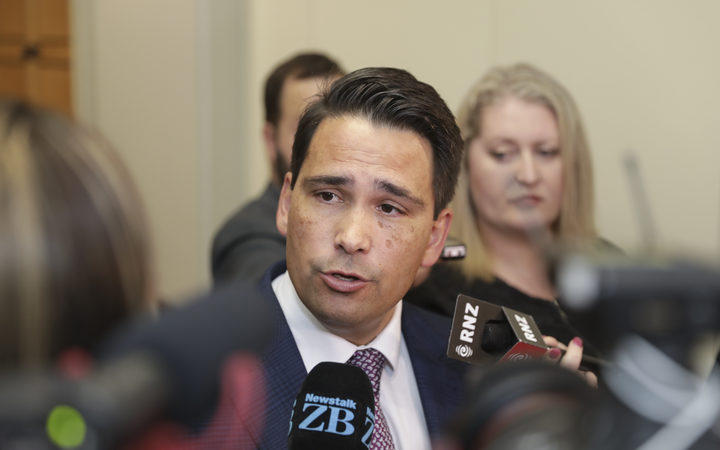 The poll was taken after what National's leader Simon Bridges described as "the worst week for National I can remember".

It was the worst week for National anyone can remember.

So escaping with a small slide was a relief, because it could have been much worse.

Also a relief for National was having Jamie-lee Ross, who caused the carnage, out of circulation.

If he hadn't gone into mental health care last weekend, this week could have been as disastrous as the last one.

Mr Ross didn't stay in care for long and left to stay with a friend. It's not clear when or whether he intends to resume his vendetta with Mr Bridges and the National Party.

The OneNews Colmar Brunton poll had National down 2 points to 43 percent and Labour up 3 points to 45 percent.

Mr Bridges' personal popularity slipped to 7 percent with Judith Collins just behind him on 5 percent.

That triggered speculation about Ms Collins' chances of taking over the leadership, but there's no likelihood of a change any time soon.

And who would want to lead National right now anyway? No one. Mr Bridges will be left to clean up the mess.

When he's had his best shot at that others will start assessing the health of the party and their own chances.

Mr Bridges is doing his best to show he's firmly in charge and says that "coming through the fire" has made him stronger. He's not clear of the flames yet.

The toxic episode which began with Mr Ross alleging electoral fraud over a $100,000 donation has had the effect of generating debate about transparency and whether current disclosure rules are sufficient.

The main parties are not showing any inclination to change the regime around anonymity because they don't want to limit their ability to protect the identity of their donors.

Prime Minister Jacinda Ardern said the system was "robust" but pressure for change is mounting and the Greens have called for anonymity to be removed from donations above $1000.

Another issue that's being discussed is whether political parties should be state-funded, which gets rid of the donation problem.

That's been around for decades but no government has been prepared to bite the bullet for fear voters would resent politicians spending taxpayer money on their campaigns.

Justice Minister Andrew Little acknowledged on Thursday there was "public disquiet" around donations and transparency and suggested there could be changes.

He thought the best place for the discussion to take place would be within the parliamentary committee that is carrying out a routine review of the last election.

Ms Ardern delivered the other big moment of the week, surprising Parliament by saying "I can give this guarantee to this House and to consumers - there will be no other regional fuel taxes while I am prime minister".

Former Prime Minister Sir John Key made a similar pledge in 2008 when he said he would resign from Parliament if there was any change to national super under his watch.

Their reasons were identical - opposition claims of secret agendas.

Sir John was reacting to Labour claims during an election campaign that National had covert plans to raise the retirement age.

Ms Ardern was reacting to Mr Bridges saying in Parliament the government was secretly discussing a regional tax with Wellington City Council.

Earlier this year Parliament passed a bill which allowed Auckland Council to impose a regional fuel tax, and would have made it possible for other councils to ask for the same from 2021.

That gave the opposition endless opportunities to claim there were more regional fuel taxes in the pipeline, and Ms Ardern decided there was no way she was going to put up with that

A few minutes after Ms Ardern made her pledge, he was asked when he first knew about the decision.

"When the prime minister stood up," he replied.

Transport Minister Phil Twyford later said he had known about it beforehand - he discussed it with Ms Ardern that morning.

Because of "a glitch" Mr Jones had been left out the loop.

Ms Ardern said she made the announcement for the sake of clarity.

Mr Twyford said it had been made because of "baseless opposition scaremongering".

Councils reacted by asking how they would be expected to pay for infrastructure without their own regional fuel taxes.

"If regional fuel taxes are taken off the table, then we want alternatives," said Local Government NZ president Dave Cull.

He's suggested councils could receive a share of GST generated in their regions.