Analysis - One of the worst things that can happen to a political party is being embroiled in a scandal that won't go away and can't be shut down. 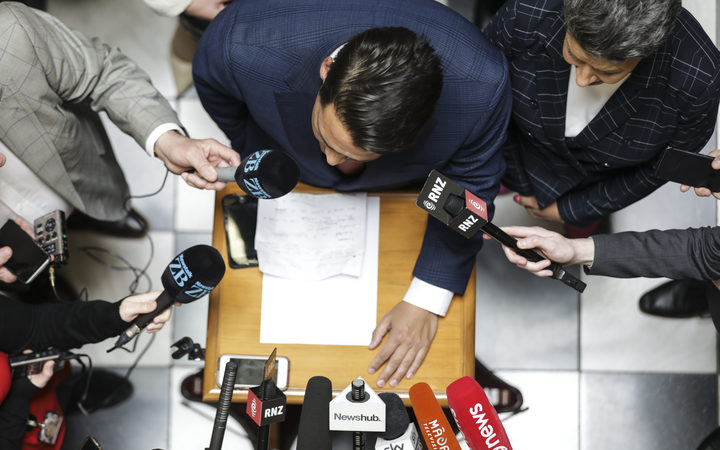 That's what's happening to National right now. It will be damaging and debilitating, it plays into the government's hands and could force a leadership change before the next election.

Jami-Lee Ross is in the process of destroying himself with the sole intention of bringing down National's leader Simon Bridges.

National's caucus has fiercely turned against Mr Ross and the effect of that has been to close ranks around Mr Bridges.

But while he may be cleared of any wrongdoing by the police inquiry into allegations of electoral fraud he will be tainted by it, and National will want a clean start under a new leader before the 2020 election.

Jami-Lee Ross has made serious allegations about the $100,000 donation said to be from a Chinese businessman, which he claims was then split into smaller parts to avoid transparency. However, Bridges has denied those allegations.

That's for the police to decide, and it's likely to take weeks if not months.

Until that's completed, the allegation will continue to hang over Mr Bridges and the party. There will be no clear air for it to get its messages across, there will be little interest in its attacks on the government and caucus morale will suffer.

Mr Ross was fired up and assertive, threatening further disclosures and running his own agenda until reports emerged of toxic affairs with two women and manipulative, intimidating relationships with others.

RNZ has not verified the allegations. In an email to RNZ, Mr Ross said he will not comment on the Newsroom article, but is considering his legal options.

Will he contest the Botany election as an independent, as he has vowed to do? He didn't have a chance of winning before those ugly aspects of his personal life were laid bare, and now would surely face a humiliating defeat.

Mr Bridges and his deputy Paula Bennett used the reports to condemn Mr Ross, saying he would have been kicked out of the party much earlier if they had come to light before now.

By the end of the week, Mr Ross was the bad guy facing vilification.

Ms Bennett said she didn't want to try to get into his mind. "That seems like a very dark place."

Mr Ross also failed to deliver on his claim that the taped conservation with Mr Bridges would reveal electoral fraud.

It didn't. There was reference to the $100,000 donation but no instruction from Mr Bridges for it to be split up.

There were some horribly embarrassing comments by Mr Bridges about some of his MPs, including the unfortunate Maureen Pugh, which forced an abject apology.

And there were remarks about the ethnicity of list MPs which made international headlines.

After discussing the donation Mr Bridges remarked that it would be nice to have two Chinese MPs, to which Mr Ross responded "two Chinese would be more valuable than two Indians, I have to say".

Mr Bridges replied "yeah, which is what we've got at the moment".

Chinese and Indians interviewed by RNZ in Auckland thought their conversation had been racist, and didn't like it.

While those comments made a good story, they're not likely to cause lasting damage.

What will be worrying Mr Bridges, and probably others as well, is that Mr Ross apparently recorded many conversations.

MPs talk to each other and about each other all the time, conversations that are usually harmless unless they're blasted across the media.

National's poll ratings, which have stood up very well since the election, are likely to take a hit.

While it may be clear to voters that a single MP is causing all the trouble, and he's no longer in the party, strife and angst are never a good thing.

This scandal is unprecedented in its level of vitriolic nastiness, and it has almost totally dominated the political media.

In Parliament's debating chamber, insulated from what was going on outside it, National's front bench harassed the government over record petrol prices and increases in the number of people on job seeker benefits.

Opposition finance spokeswoman Amy Adams wanted to know whether the government would reduce excise on petrol if it reached $2.80 a litre, which she said was being forecast.

She was told excise duty was lower than in most countries and the increase in the petrol price was being caused by the rising cost of crude oil.

Social Development Minister Carmel Sepuloni was asked why the number of people on the job seeker benefit had increased by 9000 over the past year, and why more people were asking for hardship grants.

She said the increase in job seeker numbers was because of population growth and the proportion was the same as this time last year.

More people were applying for hardship grants because of the increase in the cost of housing, she said, and blamed the previous government for that.

It was business as usual, and no one was taking any notice.