New Zealand should be leading the call for an independent international inquiry into the death of Saudi Arabian journalist, Jamal Khashoggi, the Green Party says. 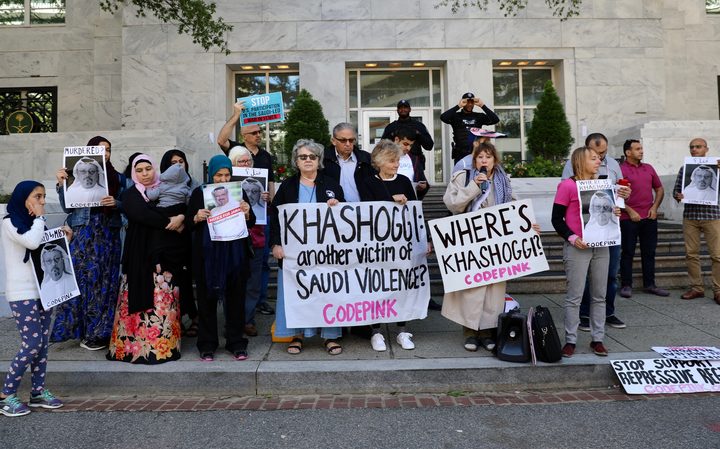 A group of people hold pictures of Jamal Khashoggi during a demonstration in front of the Embassy of Saudi Arabia in Washington. Photo: AFP

So far the government has not commented.

The journalist was last seen entering the Saudi consulate in Istanbul on 2 October, to pick up paperwork that would allow him to marry his fiancée Hatice Cengiz.

After two weeks of denials, the Saudi Arabian government said Mr Khashoggi died in the consulate, though it has not said what happened to his body.

It claims the journalist died accidentally following a fight.

But Turkish officials have said he was deliberately killed inside the consulate, and his body dismembered.

The Green Party's foreign affairs spokesperson, Golriz Ghahraman, said information coming out from Turkey and Saudi Arabia could not be relied on.

"We do have to raise our voice and say no. Regime based crimes against a free press are not okay and we won't accept the word of a regime who is possibly guilty of this crime. We do want an independent investigation and if this was a targetted killing, then we'll have to act in the way that an international citizen should."

Ms Ghahraman said it was likely it would be raised among coalition partners next week.

US president Donald Trump said questions remained unanswered over the death and he was not satisfied with Saudi Arabia's handling of the incident.

Human-rights groups and European countries have expressed scepticism over the Saudi account, and the European Union is insisting on a thorough, credible and transparent investigation.

"We should be making pressing consultations with partners along the lines of an international inquiry."

There might be an economic blow if New Zealand stood up against Saudi Arabia, Mr Harris said, but that must come second to human rights.

"We've got a revolting crime and this nonsense about it being some sort of 'accident'."

He said doing nothing would set a dangerous precedent and international norms and conventions would "go out the window", if Saudi Arabia wasn't held to account.

"This whole business of the Saudi's doing their own investigation, is so insolent and contemptuous towards the international community, including us, that it demands some response."

He said it was disgraceful that the only international action to date was people "sheepishly leaving" an investment conference.