West Coast-based National List MP Maureen Pugh admits she was furious when she heard a recording of party leader Simon Bridges referring to her as "f…ing useless". 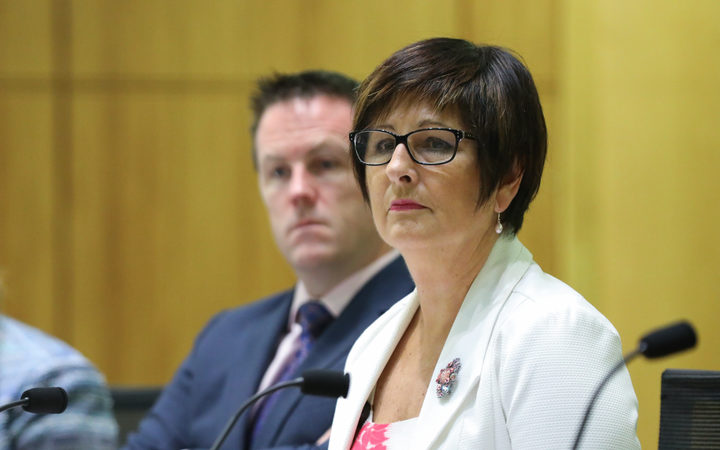 She went straight to his office and confronted him, she told The Westport News.

Mr Bridges made the comment in a six minute phone call with then National Party MP for Botany, Jami-Lee Ross, in which they discussed a $100,000 donation from Chinese businessman Zhang Yikun.

Mr Ross released a recording of the call yesterday.

It was made less than a fortnight after Mr Bridges had been on the West Coast with Mrs Pugh for his nationwide "Connecting with Communities" road show.

Mr Bridges talks about a possible 'mercenary cull' and how he'd like two or three MPs to leave, including Mrs Pugh, whom he describes "f…ing useless".

Mrs Pugh said she got "pretty angry" when she heard the recording yesterday. "I did go down to his office. He apologised and, I've got to say, very sincerely. He was pretty distraught about the whole episode.

"Then later on we had a decent conversation about it last night as well.

"I'm putting it behind me. He's remorseful, he regrets saying it, he assures me he didn't mean it.

"I've got a job to do and that's sticking up for the people I represent and that's what I really want to focus on."

She believed Mr Bridges when he told her he didn't mean what he said to Mr Ross about her.

"I have a very good working relationship with Simon and all of my colleagues. The feedback over the last 12 or 15 hours has been extraordinary."

Asked what she had accomplished on the West Coast, Mrs Pugh cited the Taramakau Bridge, the Greymouth Hospital rebuild, infrastructure spending, the broadband roll-out and roading projects, including the Mingha Bluff. The National Government had also launched the West Coast Economic Development Action Plan, and funded it, although some of that funding had since disappeared, she said.

"I've been in the job literally just over two years altogether. I'm pretty comfortable with the achievement that I've managed to pull off for the electorate."

On Twitter, Mrs Pugh wrote she might have annoyed Mr Bridges by being too persistent about her region.

"I probably have annoyed Simon at times because I'm a fierce advocate for West Coast/Tasman," she said. "I'm always in his ear, at times pushing the envelope for what is right for my community.

"I'm glad that JLR, a man who deliberately released a recording that he knew would embarrass me, is no longer in our caucus."

She said today it was "despicable" that Mr Ross, someone Mr Bridges trusted and called a friend, had sabotaged his colleagues. Mr Ross had also been a member of the party's board.

"The manipulation that he's been able to infiltrate into the whole party has been quite extraordinary.

"It's not until you look at it in hindsight you realise what sort of damage he could have been inflicting."

She "absolutely" supported Mr Bridges as party leader, "I've got great faith in his ability."

She also supported his decision to pursue the inquiry into who had leaked information on his expenses. The inquiry fingered Mr Ross, who resigned before National's caucus expelled him, then went rogue. He has denied being the leaker.

Mrs Pugh said National would have suffered "death by a thousand cuts" if it hadn't found the leaker. "We've lanced the boil, and he's gone."

Mr Bridges fronted media after the tape was released and offered a "heartfelt apology" to Mrs Pugh.

"I have apologised profusely to her for my wrong comments," he said. "I am mortified. There is no excuse for them."

He described the recording as a "blunt, private conversation" and said he didn't mind his Ps & Qs.

Mrs Pugh was Westland mayor from 2004 to 2013. She became an Officer of the New Zealand Order of Merit for services to local government in 2014.

She stood for West-Coast Tasman in 2014, scoring about 2700 fewer votes than Labour's Damien O'Connor. She narrowly missed out on a List seat and was sworn in in February 2016 after Tim Groser resigned.

She stood again last year, losing by about 5600 votes to Mr O'Connor although her support went up. She lost out on a List seat after special votes were counted, but re-entered Parliament following Bill English's resignation in March.