National Party leader Simon Bridges is adamant the party is united under him after now-ousted member Jami-Lee Ross criticised his leadership.

Mr Bridges has addressed media after Mr Ross stepped forward earlier today with his claims that the leader had broken electoral donation law.

It follows on from yesterday when the party leader said an inquiry into a leak on his expenses identified Mr Ross as the likely culprit.

Mr Ross denied those claims and said Mr Bridges was attempting to use his contact with a local police area commander and a journalist as evidence that he was somehow involved.

Mr Ross questioned Mr Bridges' leadership and criticised him heavily. He claimed he was not alone, with other members of the party not satisfied, but said they would remain silent.

After a caucus meeting that was being held during Mr Ross' press conference, the party leader announced that by unanimous vote Mr Ross was expelled.

"Fifty-five MPs today say he is wrong, 55 MPs today won't tolerate anything about Jami-Lee Ross, he is not longer a part of our caucus, he is irrelevant as far as we're concerned.

"I have the unanimous support of my caucus, we have dealt with a lone wolf MP, who has leak, lied, made a number of wild allegations, we're now putting a line on that and moving on."

He said the party would continue to be united and look ahead to the future.

"Jami-Lee Ross is no longer part of National in terms of our caucus going forward and we'll be resolutely strong and united and focused on the things that matter to New Zealand."

However, Mr Ross this morning had already announced he will resign from his seat, step down from the party, and will stand as an independent in any by-election for his Botany seat.

Mr Ross said he once thought Mr Bridges was capable of being Prime Minister, "but now that I see what he's really like it is clear that he's not".

"I believe Simon Bridges is a corrupt politician."

Mr Ross also alleged Mr Bridges asked him to collect a $100,000 donation from a wealthy businessman and was at pains to point out the donation should not be made public. He said the donation was split into smaller amounts below the $15,000 declaration threshold. 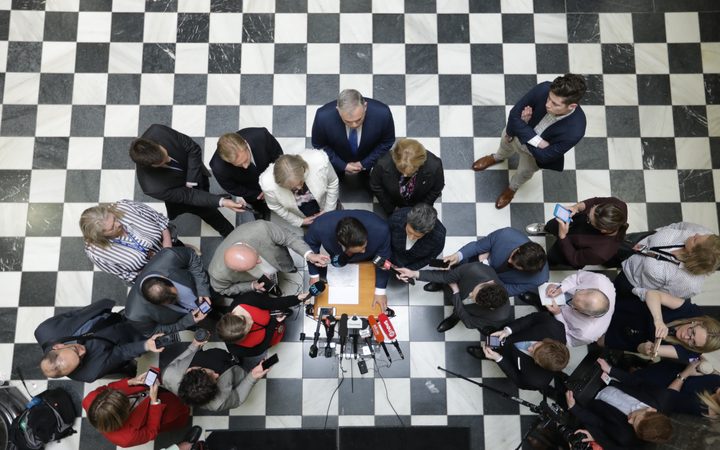 "He is completely wrong, this is now and should be a matter for the police, for him to put up and for them to investigate it. It has zero chance of success because it's wrong.

"Everything that Jami-Lee Ross has been saying, because we are talking about guy who is lying, who is leaking, who is lashing out... I have done absolutely nothing wrong and that will be shown to be the case."

On the other hand, Mr Bridges insisted that he had been compliant of electoral laws.

"I've complied with electoral laws at every single moment, and nothing will come of this," Mr Bridges said.

"We have followed all of the rules here in terms of the National Party and that will be shown."

Mr Bridges said he would not pursue legal action against Mr Ross.