The National Party leak scandal has turned into a full-blown turmoil, with now ousted MP Jami-Lee Ross and Simon Bridges going head to head. Here's what happened in the lead-up to today's revelations and claims. 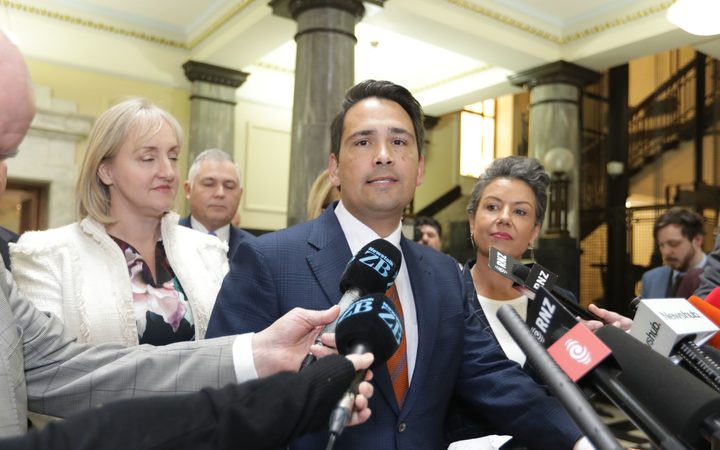 13 August: An update on MPs' expenses leaked to Newshub showed Mr Bridges spent $113,973 on travel and accommodation between April and June. Most of that - $83,693 - was spent travelling in the crown limousine.

The former Labour leader, Andrew Little, had spent roughly $35,000 less on travel during the same period in 2017.

Mr Bridges defended the spending, telling RNZ that getting out and about in New Zealand was a crucial part of his job. "I've been working incredibly hard to get out and around New Zealand regionally, to understand what's happening, to get a real sense of what's going on with businesses," he said.

14 August: Questions immediately began on who had leaked the information before the official list of MPs expenses was made publicly available.

Parliamentary Service sends the information to the Speaker's office and to each party ahead of its release. The parties can see information about fellow caucus members, but not MPs from other parties. Speaker of the House Trevor Mallard said the format in which the document was leaked meant it could not have come from his office.

Prime Minister Jacinda Ardern said she didn't believe Labour MPs leaked the details and Mr Bridges was confident none of his MPs were responsible either.

Mr Bridges demanded an inquiry, independent of Parliament and government.

15 August: Speaker Trevor Mallard announced a QC would carry out an inquiry, supported by an employment lawyer and a person with forensic IT skills.

16 August: Parliament Service released the official figures for MPs expenses, showing spending on travel and accommodation across all parties has rocketed up to more than $2m. The figures don't include the latest spending by the Prime Minister or other ministers, which is still to be released.

23 August: Mr Mallard Michael Heron QC to conduct an inquiry into the leaking of the opposition leader's travel expenses to the media.

Mr Mallard said that whoever leaked Simon Bridges' expenses would be exposed.

24 August: A person claiming to be the National Party leaker sent an anonymous text to Mr Bridges pleading for the inquiry into the leaking of his expenses to be called off, RNZ was told.

Sources told RNZ Mr Bridges and Mr Mallard both received an anonymous text message the previous week from a person claiming to be responsible for leaking the information to Newshub.

The author of the text warned they suffered from mental health problems in the past and said being exposed publicly could push them over the edge and put their life at risk.

The text, which RNZ did not see, detailed a number of conversations and pieces of information from National caucus meetings over a period of weeks in an attempt to prove the author was a National MP.

In the message, the author said they had leaked the expenses because they disagreed with Mr Bridges' leadership style, describing him as "arrogant", and wanted him to be held to account for his spending of taxpayers' money.

Mr Bridges confirmed police knew the identity of the person behind the text but would not tell the National Party leader who it was in the interest of their privacy.

The leaker attempted to verify their identity as a National MP in their message by detailing conversations and details from various caucus meetings.

Hours later, Mr Mallard called off the inquiry that was to have been undertaken by Michael Heron QC.

"It has now been confirmed to me that the person who leaked the details of the expenses and the texter are the same person. He or she has details of events that it is unlikely anyone outside the National Party would be privy to," Mr Mallard said. "The text is from someone who is clearly very disturbed and today's publicity will almost certainly make that worse. My priority is to get appropriate support to them whether they are an MP or a staff member."

27 August: Mr Bridges said he had kept Mr Mallard informed of the police investigation, and said he was continuing with an inquiry, announcing it was to be led by a QC.

Mr Bridges said neither Mr Mallard nor Ms Ardern know the identity of the leaker, but at that stage said he was still unconvinced the leaker was from within his party.

"The tragedy of all of this is that the speaker had an investigation ongoing, he stopped it on Friday for no basis that I can see, other than that the prime minister had said it was an internal matter for the National Party."

However, the prime minister rejected accusations she had any influence over the speaker's decision to halt an inquiry into the leak

4 September: All 56 National MPs signed a privacy waiver to hand over communications dating back to the start of February.

2 October: National MP Jami-Lee Ross stands down from his portfolios and from the front bench of the opposition, citing personal health issues.

In a statement, Mr Ross said he had asked for time off on medical leave for "a few months".

The Botany MP said he looked forward to returning to Parliament in the future to re-join the National caucus.

Mr Bridges told reporters in Auckland the issues were of a "deeply personal and private" nature and were revealed to him last week.

"I've got to be honest with you, this came out of the blue. You think you know your colleagues very well, but you don't always know everything that's going on for what are personal, sensitive, perhaps embarrassing issues."

He went on to say that perhaps "embarrassing" isn't the right word.

4 October: Investigators were refused permission to trawl through staffers' communications for the several months before the actual leak happene. As the staff's employer, it was up to Parliamentary Services to give permission on their behalf despite the waiver signed by National MPs.

The terms of reference - which were not made public at the time - specified a "forensic examination" of any relevant databases or equipment, used by MPs, their support staff and several people in Mr Bridges' office.

11 October: Mr Mallard had arranged a forensic investigation of emails and relevant databases connected to his office and those staff involved in the preparation of the expenses - about 20 staff in total.

KPMG, who carried it out, concluded there is no evidence that Mr Mallard or any Parliamentary Service finance staff were responsible for the leak.

15 October: Mr Bridges said the inquiry report identified former National MP Jami-Lee Ross as the most likely source of the leak, and he accepted that finding.

"Look I think he would say those things, given the situation that he is in, I am not surprised frankly by the false comments that he's making."

16 October: At 11am, Mr Ross held a nearly hour-long press conference announcing he will resign from his seat and step down from the National Party, and will stand as an independent in any by-election for his Botany seat.

He alleged Mr Bridges had broken electoral donation law and said he would put in an official police complaint.

Mr Ross claimed that Mr Bridges asked him to collect a $100,000 donation from a wealthy businessman and was at pains to point out the donation should not be made public. He said the donation was split into smaller amounts below the $15,000 declaration threshold.

He said he would release photos to prove the meeting between the businessman and Mr Bridges took place.

Mr Ross said his dramatic falling-out with Mr Bridges was the reason he was the target of a campaign to push him out of the party, and that he did not leak Mr Bridges' expenses, but he leaked the text message from the person who did.

He questioned Mr Bridges' leadership and criticised him heavily. He claimed he was not alone, with other members of the party not satisfied, but said they would remain silent.

After a caucus meeting that was being held during Mr Ross' press conference, the leader announced that by unanimous vote Mr Ross was expelled and reiterated the caucus support.

"Fifty-five MPs today say he is wrong, 55 MPs today won't tolerate anything about Jami-Lee Ross, he is not longer a part of our caucus, he is irrelevant as far as we're concerned."