World Vision is calling on Prime Minister Jacinda Ardern to offer to immediately resettle all 119 children and their families who are detained in Nauru. 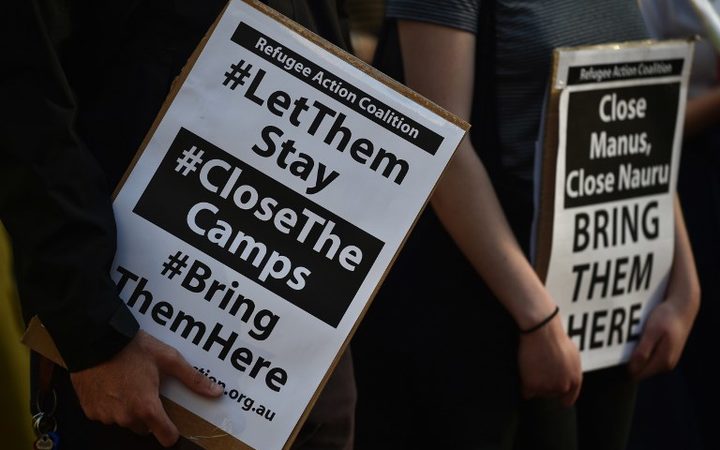 Refugee supporters hold placards as they gather in Sydney to mark the milestone of 200 days of continuous protests in the detention camp on the Pacific island of Nauru in 2016. Photo: AFP

The New Zealand government will attend the Pacific Island Forum on Nauru next month, where hundreds of refugees are still being held in detention centres.

World Vision's national director Grant Bayldon said Ms Ardern should be speaking directly to the authorities in Nauru about urgently evacuating the children being held there and their families.

"Those children are really in a desperate situation, the level of hopelessness, mental health issues, we heard just recently of another child who is believed to have resignation syndrome, there's another child on hunger strike.

"Really this is an emergency for those children."

Resignation Syndrome is where a child gives up on everything, stops eating and talking and eventually becomes catatonic.

Mr Bayldon said the conditions have always been very harsh on Nauru, but he said it was really other issues that were most concerning for people working with the refugees there, particularly for the children.

"There have been a number of assaults there, there's also denial of basic medical treatment for life-threatening conditions and we've seen the Australian Government time after time fight to stop children accessing life-saving medical care in Australia including of babies - each time that has to be fought in the courts."

Mr Bayldon acknowledged that there was already an offer on the table from New Zealand to Australia to take 150 refugees from Nauru and Manus Island, but that the offer had not been taken up.

However, he said it did not look like Australia was going to do the right thing any time soon, and there was no reason why New Zealand should not be making the offer directly to the Nauru Government.

"Even the Nauru President has said those people can not stay there forever," Mr Bayldon said.

"Last year we saw Australia again reject New Zealand's offer saying it did not want to complicate the deal it had done with the United States to resettle some of the refugees there.

"However, now with the Trump travel ban in place, a large number of the refugees on Nauru will never be able to access the United States because they are on that arbitrary list of countries where they can't travel there."