New Zealand and the European Union have formally launched negotiations for a trade agreement. 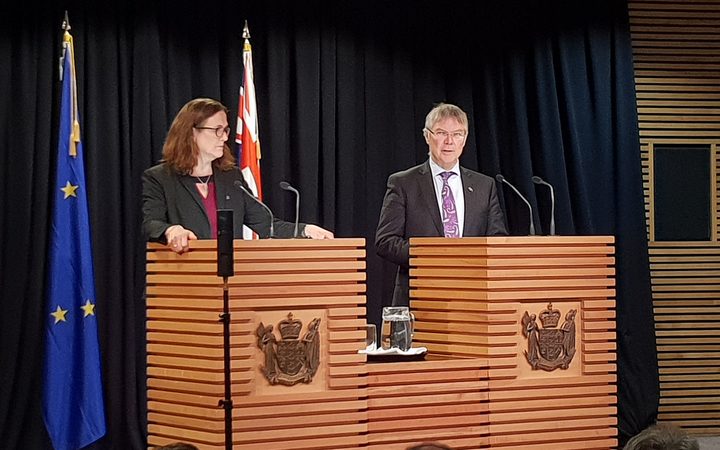 She said the negotiations would aim to remove barriers to trade in goods and services, as well as developing trade rules to make trade easier and more sustainable.

"This is about opening up a new chapter, new economic possibilities for our companies, big and small and I think we will try to focus especially on the small and medium sized companies," Ms Malmström said.

Protectionist attitudes towards agriculture and EU rules allowing some traditional foods or wine to be produced only in certain areas - will be just some of the challenges in getting the deal over the line.

He said some of the sticking points in the deal were likely to be around geographical indicators, and the EU Trade Commissioner had asked for work on those to start early so that it did not delay the deal.

"That demonstrates a willingness on the European side of the negotiation which we share in New Zealand, to bring this to a conclusion as soon as we can, and we are hopeful that we can wrap it up on our side within a couple of years, but only time will tell," Mr Parker said.

The deal would not include Investor State Dispute Settlement clauses that have been controversial in other agreements, such as the CPTPP.

Former trade negotiator Charles Finny said the volatility went further than just the US and China.

"The steel and aluminium tariffs that are now in place and impacting on New Zealand, impacting on EU, Japan, as well as China, Canada and Mexico," Mr Finny said.

"Most immediately, there is this $50 billion tariff bill being put on Chinese exports and China is retaliating, and we have to watch that very closely - it could get bigger."

New Zealand was not given an exemption when the Trump administration decided to impose import tariffs on steel and aluminium.

Mr Finny had major concerns about the state of the World Trade Organisation (WTO), and its ability to enforce global trading rules.

"It is important I think that when dealing with someone attempting to bully that there are other big players prepared to stand up and retaliate because bullies don't like that," he said.

"Problems like that between the US and China should be sorted out according to WTO rules, there appears to be no justification for these US actions and so rightly they are challenged in the WTO."

When the WTO was facing challenges to its authority, Mr Finny said it was exciting to see the EU deal progress, alongside the revised TPP.

"For a lot of our trade we will have rules that are even better than the WTO, with dispute settlement mechanisms so if the WTO system grinds to a halt we will have a plan B."