Talks for a significant trade deal with the European Union - that's been years in the making - will be formally launched today. 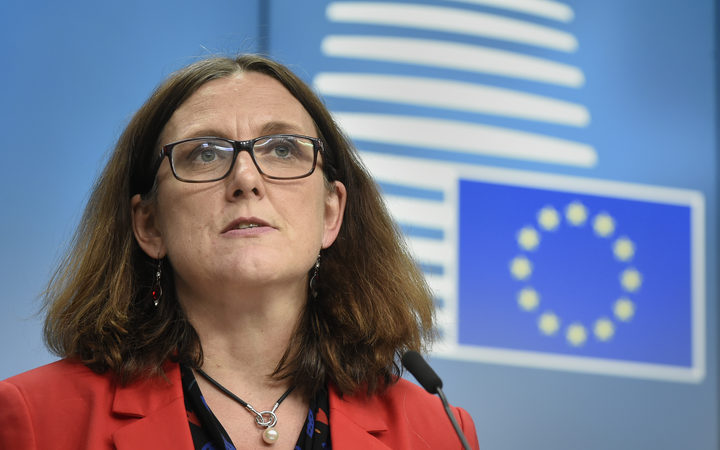 EU Trade Commissioner Cecilia Malmström is in the capital to meet with senior government ministers, and to formally mark the start of the talks.

Apart from the potential economic benefit to New Zealand, it's an important deal to be pursuing within the volatile and uncertain global trading environment.

Early estimates are a deal that could bring in up to an extra $2 billion a year to New Zealand and majorly boost trade volumes.

New Zealand already has two-way trade with the EU - and not including the United Kingdom, it's worth about $16 billion.

Speaking ahead of her visit, the European Union Commissoner, Cecilia Malmstrom, said many countries were puzzled by the lack of leadership from the United States, which she says was "disengaging" from the global scene.

"That leaves place open for the European Union to do good trade agreements that can be sustainable, transparent, mutually beneficial ... with countries across the globe."

Trade Minister David Parker said it was "absolutely tremendous" to have reached this stage.

"That we're now kicking off negotiations with the European Union for a trade deal, collectively one of the most enormous economies in the world."

But there will be challenges.

Former trade negotiator Charles Finny said many of the European countries still had protectionist attitudes towards agriculture, particularly in southern Europe and Ireland.

"When it comes to dairy and meat, so there is obviously going to be pressure on those countries from Brussels."

Former Trade Minister and National's spokesperson Todd McClay said getting good enough access for those products would be crucial.

"Unless the government's able to land a much better deal with these big export items, the value to New Zealand of an FTA with the European Union just won't deliver everything we need it to."

But what is known is geographical indications also loom large over these talks, as Mr Finny explains.

All of that will be dealt with during the talks, said Mr Parker.

"New Zealand's approach historically has been to be suspicious of geographic indicators as being an excuse for protectionism.

"Having said that we've recognised in New Zealand the benefits of protecting the brand associated with Marlborough sauvignon blanc, the Europeans have wanted to take that a lot further with more geographic indicators", he said.

The government's currently in the midst of bringing in a ban preventing most overseas buyers purchasing residential homes in New Zealand.

Only this week it confirmed a carve out for Singapore, in line with a deal already in place.

National's Todd McClay said that would create difficulties for the EU deal.

"Kiwis can buy houses in the European Union and I would think that the EU will say 'why is Australia and Singapore treated differently than our citizens, we want fairness in that New Zealand market'."

Mr Parker said that had never been flagged by the Europeans as something that would cause a problem.

Investor state dispute provisions (ISDS) - that allow corporates to sue the government - were one of the most controversial elements in the revised TPP deal, and in deals past.

But Mr Parker said there was no appetite to include them in this new deal, with New Zealand and the the EU both opposed to ISDS.

Mr Parker said the EU favoured a standing court to decide trade disputes, but New Zealand had some concerns about the ongoing cost of running such a court.