The latest call for an end to rodeos has been rejected by the government, which says will need more evidence for a ban. 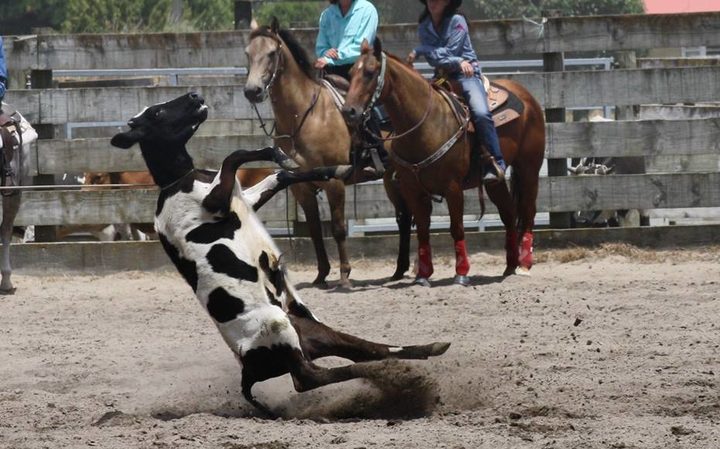 A report from the Animal Law Association yesterday, the first in-depth look at the legality of rodeos in New Zealand, found rodeos were illegal and must be banned.

It examined the Rodeo Code of Welfare and concluded it did not meet the standards set out in the Animal Welfare Act.

Lawyer and report author Catriona Maclennan said calf roping in particular was a clear breach of the Act.

Associate Minister for Agriculture Meka Whaitiri said she only had time to flick through a 92-page report from the Animal Law Association.

Ms Whaitiri was at the launch of the report at Parliament.

In her speech notes, sent to RNZ before the event, she said she would "not consider a ban on rodeos".

However, when she delivered the speech, Ms Whaitiri changed her stance saying she was not looking at a ban "at this point in time".

"I've made the statement 'I won't be banning' but I also want to be open to if there's new evidence out there I will at least consider it.

"You never know what's going to happen in five years, so that's why I've said 'not yet'."

New Zealand First MP Mark Patterson was also at the launch, and said rodeo supporters were open to change but not if they felt under attack from animal welfare groups.

"They are ready to respond but I think if you push them too hard they're just going to retrench back into their corners. I think a lot of the activists are sort of lobbing, throwing grenades, on social media."

However, New Zealand Rodeo Cowboys Association spokesperson Michael Laws said his organisation would not be sitting down with opponents any time soon.

"It's impossible to have a conversation with zealots. So, zealots believe that they are right and everyone else is wrong. You can't really have a rational discussion with such people."

He said the report was just another stunt by animal welfare activists who are jealous of the growing national support for rodeos.