About 100 animal rights activists turned out at the Waikato Rodeo in Te Awamutu yesterday to protest at what they say is cruel treatment of animals. 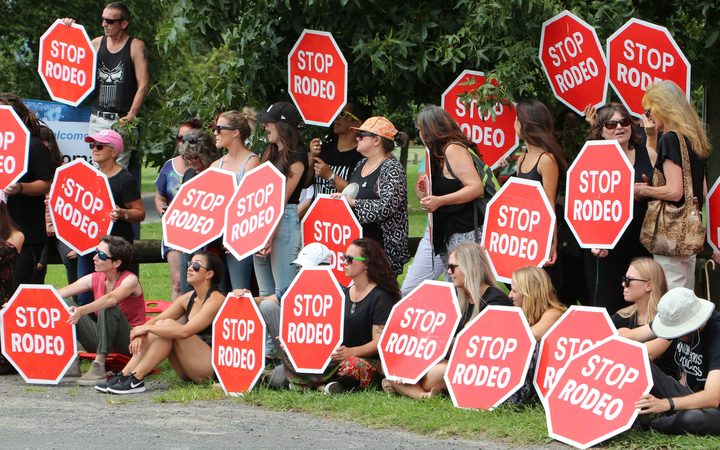 The Direct Animal Action activists, brandishing large 'STOP' signs, set themselves up at the entrance of the event.

The group argues rodeo is an archaic sport that has no place in New Zealand.

"New Zealand has a reputation for the best animal welfare laws in the world. But with rodeos there, it's actually legalised bullying, legalised animal abuse.

"It puts a bit of a shameful perspective on our reputation."

Mr Taito said Saturday's protest was the final one planned by Direct Animal Action this season.

"This rodeo season has seen a lot of well attended protests, today's protest being the biggest so far."

'Animal welfare is at the heart of our sport'

Rodeo Cowboy's Association spokesperson Michael Laws said the fact that the group had no further protests planned "rather highlights how ineffective they have been".

"We have enjoyed record crowd support at many rodeos this year. I would estimate that around 100,000 people will have attended a rodeo event by the end of this season," Mr Laws said.

"Those numbers dwarf the tiny number of protests and protestors."

Mr Laws said rodeos were overseen by independent veterinarians and the Ministry of Primary Industries to ensure no animals were harshly treated.

"Animal welfare is at the heart of our sport. It's why our sport works so well."

"We congratulate the Green Party for putting forward a members' bill that will ban the worst aspects of rodeo - calf roping and flank straps," Mr Taito said.

"We'll be back next season bigger than ever if the government hasn't put a stop to rodeo by then."