An animal rights activist says he is shocked he was banned from taking a camera into a Christchurch rodeo and been given a two year trespass notice. 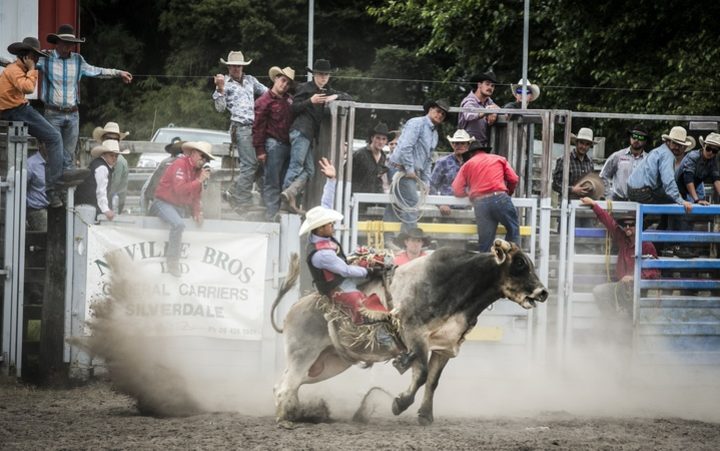 Matt Walker, who grew up and lives in North Canterbury, said he asked security at the Mandeville Sports Grounds yesterday whether he was allowed to bring a DSLR camera into the rodeo.

Mr Walker said they told him he could, but when he came back with one, he was refused entry.

"They gave me a range of different answers, at first they told me it was because a professional photographer was in there and I said nobody else has been trying to undercut that person by selling photographs," he said.

"Then they changed the story to ... people didn't want to be on film and at that point I said you were going to let me bring in a cell phone camera and this is much the same."

Mr Walker said the president of the Canterbury Rodeo Club, Jono Reed, then came over and in front of about eight security staff told him they did not want any filming that would cast rodeo in a negative light.

"Is that really acceptable? [I told him] it seems like you're trying to censor out unbiased and independent filming from the event," he said.

Mr Walker said he left after he was given the trespass notice because he did not want to cause any trouble, but he said he did not expect to be treated like that.

"This particular club, I used to play rugby out there when I was 10-years-old ... to be trespassed not only from the rodeo club but also from the entire sports ground was a little bit shocking for me," he said.

RNZ has contacted Mr Reed but he is yet to comment.

Animal Justice League New Zealand, who was peacefully protesting outside the same rodeo event, said this was not the first time people have been banned from bringing in their cameras.

Spokesperson Holly Button said activists who were filming at a rodeo in Taupo last week were asked to stop recording and threatened with trespass notices.

"It's deeply distressing the allegations that cameras aren't being allowed inside to film these events," he said.

"My message to the rodeo association is that if you've got nothing to hide, then you should allow cameras in to film these so-called sports events."

Mr Hughes said he was working on a private member's bill to outlaw aspects of rodeo such as chasing young calves and lassoing them.

The president of the New Zealand Rodeo Cowboys Association, Lyal Cocks, said each club has their own rules and decide whether or not to allow cameras into rodeo events.

Mr Laws said Mr Walker was trespassed from the event due to his behaviour. The ban on cameras was due to commercial reasons but activists had in some cases altered images taken at past events, he said.