Some Māori are demanding greater clarity about how the Trans-Pacific Partnership will affect the government's Treaty obligations.

Opponents of the 11-nation trade deal said the protection of Māori tikanga, knowledge and sovereignty needed to be ensured. 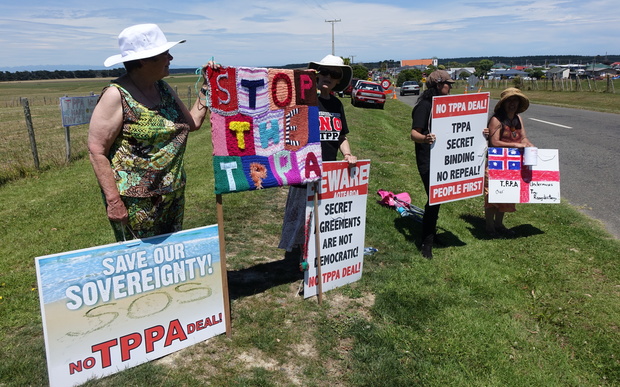 Rātana church elders and Māori leaders were among those who opposed the original TPP in 2016 Photo: RNZ / Leigh McLachlan

It's been touch and go for the TPP after the United States pulled out and Canada played hardball at APEC last November.

But now it's been agreed and the deal will be signed in March - though the Labour Party will need National's support to get it over the line.

In 2016, the Waitangi Tribunal ruled the deal did not breach the Treaty, because of a clause protecting Treaty rights.

But the tribunal did raise concerns about how the TPP could affect the Crown's ability to meet its Treaty obligations.

The new government had not followed through on their promise to consult more with Māori on the deal.

"We want to be able to work with them, but if they're not going to stand up for the things they said they would stand up for, then these are hollow words and ... it's pretty hypocritical."

"If corporates can hold this government to account then they lose [that] sovereignty."

Federation of Māori Authorities chair Traci Houpapa said members of the organisation initially had concerns over cultural integrity and rights, but the federation was happy with the revised deal.

The Māori economy was estimated to be worth more than $50 billion, with iwi assets alone valued at more than $7 billion.

The opening of trade tariffs would have major economic benefits for Māori, especially in new markets like Japan, Ms Houpapa said.

Musician and activist Moana Maniapoto, who opposed the agreement, said Māori communities needed to be actively engaged over what the deal meant for them.

It was wrong to simply frame discussion on the TPP deal around the economic benefits for Māori.

"Things that are essential to us as Māori, our traditional knowledge - are we going to give away our Treaty rights in order to sell sheep or kiwifruit?"

The government said it expected serious interest from other countries wanting to join the new Trans-Pacific Partnership once it's signed.

British media have reported ministers there have held informal talks on joining the free trade group that currently includes 11 countries.

Prime Minister Jacinda Ardern said she had not heard anything formal from the UK about joining but it was not the only nation to show interest.

"Certainly in this environment, multilateral agreements are tending to be what most nations are pursuing.

"I can see why it would be of interest for the UK, given Brexit and the ramifications of that for them. But I haven't heard anything formal, only what I've seen reported," she said.

Britain cannot commence negotiations until it exits the European Union but New Zealand has said it was keen to negotiate as soon as possible.

"[It's] about how we'd like to proceed with them when it comes to trade in the future ... the British invited New Zealand to make a submission and we've done that."

If the TPP was a good deal, everyone would be signing up eventually, Mr Peters said.