Poll of Polls - New Zealand pollsters still seem to be doing a competent job of gauging public opinion. The last RNZ poll of polls average before the election was strikingly close to the final result. 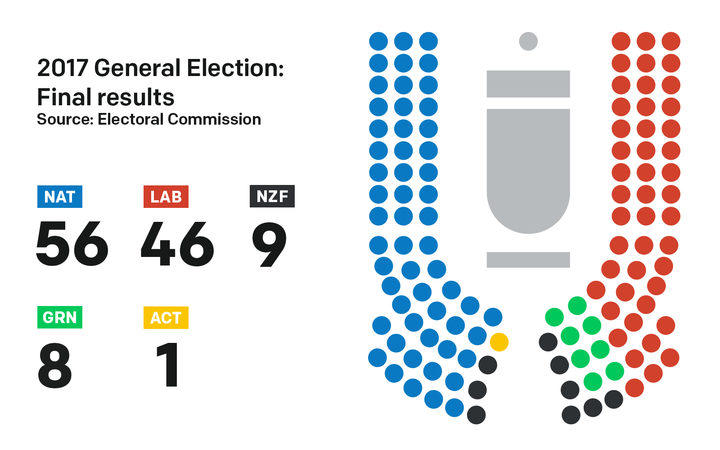 How parliament will look Photo: RNZ

The average of polls taken in the nine days up to 20 September gave National 45.1% support. The actual vote was 44.4%.

Look back on RNZ's live coverage, read a full wrap of the outcome or dive deep into the results with our infographic.

Both were well within 1 percentage point of the actual outcome.

The poll of polls gave National 55 seats, Labour 46, the Greens 9, New Zealand First 8 and ACT 1. That assumed the Māori Party held one seat. Taking that seat off the Māori Party would have boosted National to the 56 it actually got.

The poll of polls also looked at the trend lines but noted that the skewing effect of the "Jacinda jolt" from 1 August made it difficult to work out from which date the trendlines should be drawn and thus it was doubtful they would point accurately to the final result as they had in recent previous elections.

In the event, averaging three sets of trendlines drawn from the beginning of the year, three months out from the election and one month out gave National 42%-43%, Labour around 39%, New Zealand First 6% and Greens 7%.

* The three polls in the last average before the election were, in order of their polling-period midpoints, Newshub Reid Research, UMR (unpublished, for the Labour party) and 1 News Colmar Brunton.