The courting of Winston Peters has begun in earnest after a series of quickfire meetings at Parliament with the leaders of National and Labour.

The preliminary talks - National Bill English in the morning and Labour Jacinda Ardern in the afternoon - lasted only half an hour each.

There were no discussions around policy, Mr Peters said, but instead the meetings set out protocols for the official negotiations will begin after the special votes are revealed on Saturday. 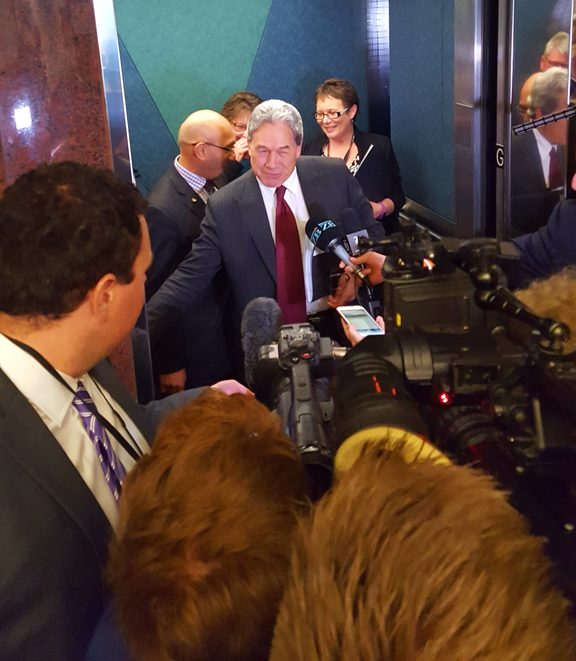 "Do we agree to meet a certain place on each occasion?" Mr Peters said.

"Do we agree that we'll have changed teams depending on the subject matter? Do we agree these talks are confidential between ourselves and no one else?"

Mr Peters stressed the importance of the negotiations being kept away from the media.

"Otherwise we may as well hire the Westpac Stadium, turn on the lights, turn on the loud speakers and just go for it. Now we're not going to have that sort of circus."

While holding an elevator door open to talk to reporters, Mr Peters also said as the leader of the party in the position of having to choose which party would govern the country, he was in a no-win position.

"We're between the devil and deep blue sea here - not in terms of the political parties, but we just can't win.

When asked to elaborate, Mr Peters said the whole thing has been "depicted as one man holding the country to ransom".

And he said he would stick to his self-imposed deadline of confirming a deal either way by next Thursday.

In terms of negotiating teams, Mr Peters was flagged by MPs Ron Mark and Tracy Martin, as well as top advisor Paul Carrad and chief of staff David Broome.

Mr Peters said he expected his team to change depending on the circumstances and the meeting. 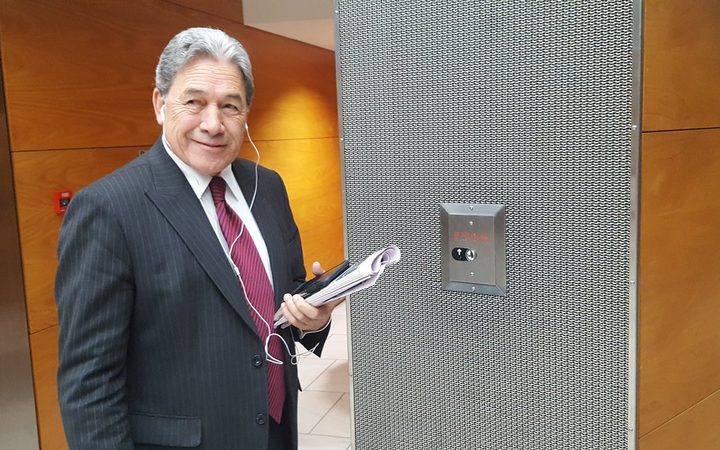 Mr Peters said this morning talks could not properly proceed until the 380,000-plus special votes have been counted.

"Any idea that we shouldn't have to regard them is just preposterous in a democracy."

Mr Peters said it would be "wise" to find out what the public said and until that happens everything else was "pie in the sky, dreaming and speculation".

He said New Zealand First's policy comparison with the other parties would be completed tomorrow and, apart from the meetings, that would be its main focus for today. Consultation with party members was ongoing, he said.

Earlier, Mr Peters met families of some of the men who died at the Pike River coal mine in 2010.

Last year Mr Peters said re-entering the mine would be a bottom line in any negotiations, going as far as pledging to go into the mine himself.

Anna Osborne, whose husband died in the disaster, said she had faith Mr Peters would deliver on his promise.

"It was one of his bottom lines and it still is - and to have that reaffirmed has just been amazing.

"It certainly put a smile on the Pike River families' faces, that's for sure."

Mr Peters said major parties would have to keep an open mind about Pike River as part of negotiations.

"This is a serious matter, 29 people lost their lives.

"They've been denied justice, it's just been contaminated with a whole lot of appalling political behaviour so we intend to sort it out."