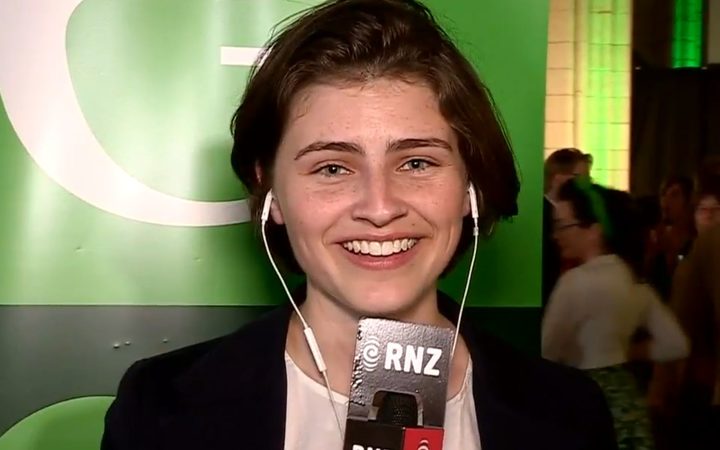 At number seven on the party's list Ms Swarbrick is, on the preliminary figures, the last Greens list candidate above the cut-off point.

At age 23, Ms Swarbrick would be the youngest MP in 42 years.

"It's pretty surreal," she said.

With 98 percent of the vote counted - not including special votes - the party was on 5.8 percent. With no electorate seats, the party would only be able to bring in list MPs.

However, Ms Swarbrick was also hopeful that special votes would bring at least one, if not three, more Green MPs to Parliament.

"I'm hoping that what we see from the special votes is you know, we've got from what I've heard about 200,000 that are yet to be calculated from the advance voting period which are people that enrolled and voted at the same time over the past two weeks.

"We're still also yet to obviously calculate the special votes that happened today and of course the overseas votes so there's hundreds of thousands of votes yet to be counted.

"And we're hoping that that also delivers obviously Golriz Ghahraman, but also Mojo Mathers and Barry Coates too."

Special votes have tended to be more left-leaning in the past, bringing the Green Party an extra seat in the last election at the expense of the National Party.

Ms Swarbrick said it had been a very tumultuous campaign for all parties, with three different leaders from three political parties resigning.

"We fought our guts out and we left everything on the battlefield so obviously we're stoked to be returning to parliament and that's something that we've been hearing from our supporters on a grassroots level.

She joined the Green campaign after running for the Auckland mayoralty and surprising pundits by coming third on votes behind Phil Goff and Vic Crone with a low-budget grassroots campaign.