The huge number of early voters is highlighting what politicians are calling New Zealand's weird and inconsistent rules for election advertising. 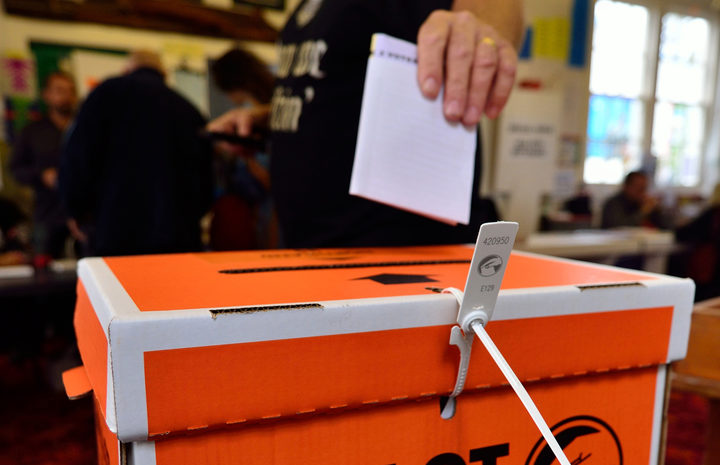 Almost half a million New Zealanders had already cast their vote by Sunday. Photo: 123RF

Under the Electoral Act, there is an election advertising blackout on polling day. That means billboards and signs must be taken down, and any election advertising on TV, radio or the internet must stop. The rule also covers things like vehicle signage, bumper stickers, T-shirts and social media posts.

But the increasing popularity of advance voting - and the fact the restrictions that apply on election day don't apply during the advance voting period - has raised questions about whether the rules are still fit for purpose.

This election, the Electoral Commission predicts that almost half of voters will cast their ballot before 23 September. Almost 500,000 had voted by Sunday.

The advance votes are the first to be counted, and they should be made public by about 7.30pm.

Otago University law professor Andrew Geddis has said that in the previous two elections the preference distribution of those early votes quite closely matched the final election night result.

'Time for a full review'

Green Party leader James Shaw said it was time to take another look at the "weird" election advertising rules.

"Some of the rules that we had around not campaigning on election day now look quite anachronistic in that light," he said.

"I think it is time for a full review, not just what happens in the two weeks in advance, but actually on election day as well. Some of the restrictions that you have on election day itself might loosen up, while things might tighten up during that advance polling period."

And New Zealand First leader Winston Peters said there was still a lot of campaigning going on when hundreds of thousands of people had already cast their votes.

"Maybe the message is spend all your money before September 11 in this case."

Wellington lawyer and electoral law specialist Graeme Edgeler said many New Zealanders probably liked that there was no formal campaigning on election day, so they would not be accosted to change their vote as they headed into the polling booth.

But he said Parliament should revisit the rules, as the restrictions designed for broadcast and print media seemed unfair and unnecessarily restrictive for the public's personal use of social media.

In a statement, the Electoral Commission said any changes to the rules around campaigning and election advertising during the advance voting period would be up to Parliament.

After each election, a post-election select committee review is undertaken, and following the 2014 election, the issues around advertising during the advance voting period were considered.

The select committee decided not to recommend changes to the election day rules, but some further restrictions within 10 metres of the entrance to advance voting places were introduced.