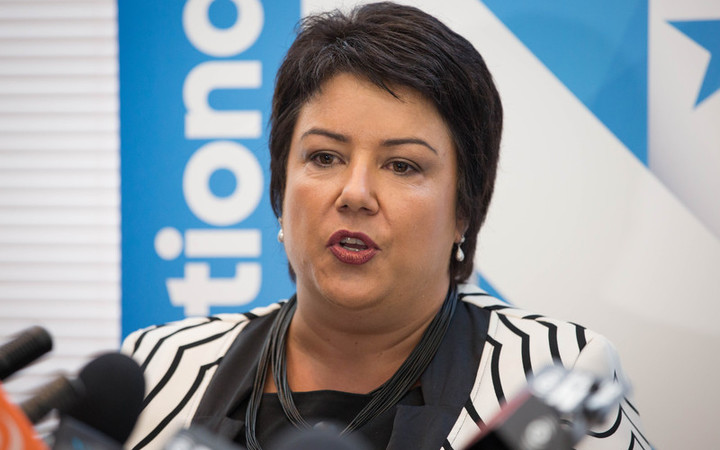 Paula Bennett stood by the policy but apologised for her comments at the launch. Photo: RNZ / Claire Eastham-Farrelly

Mrs Bennett, the party's police spokesperson, made the comments when launching a new policy yesterday proposing to give police greater powers to search for firearms.

The policy would allow police to search criminal gang members' cars and houses for firearms at any time.

"Some have fewer human rights than others when they are creating a string of victims behind them," Mrs Bennett said at the announcement.

"There is a different standard."

Her remarks, and the policy itself, have drawn criticism from academics and the Chief Human Rights Commissioner.

Mr English told Morning Report Mrs Bennett's remarks were a mistake and that she was not describing the policy in the right way.

"She understands the policy the right way, but it was a discussion about the legal rights of particular people, not the human rights of New Zealanders," he said.

She has now admitted it was a blunder, but said she stands by the policy.

"Oh, I don't like that the Prime Minister's had to go out and defend me this morning, so I've apologised to him in regard to that.

"But I certainly don't apologise for this policy that I think is really good work and will make a difference in terms of keeping our streets safer.

The latest criticism of the policy came from National Committee for Addiction Treatment co-chair Vanessa Caldwell, who said it would cause more harm than good.

Ms Caldwell said the suggestion that serious criminals in the drug trade had fewer rights would alienate people seeking help for methamphetamine addiction.

"The issue is that the tough on crime stance becomes so broad that those policies start to infringe on people who may not be the people that they're actually wanting to target.

"That's certainly been the experience in the last decades, and this is going back to the '80s when we had the war on drugs mantra and that has been spectacularly unsuccessful."

"And that's what we've been moving away from in the last few years and very successfully. The police are very supportive of [moving away from it] ... they know they can't arrest their way out of this problem."

She said the idea that gangs had a monopoly on the methamphetamine distribution was a myth.

"We've got people across the spectrum of society that actually experience the impact of drugs in their families and ... who are involved in the drug trade.

"It's certainly not the domain of gang members only so to target them specifically actually doesn't do much to solve the problem - in fact it makes it more difficult for those people to put up their hands for help."

She said the committee had seen success with programmes that aimed to help gang members who had put up their hand for help, but funding had been withdrawn in the past few months.