Pike River families are hailing today as a "moral victory" after MPs from four parties pledged to act immediately to re-enter the West Coast mine if in government. 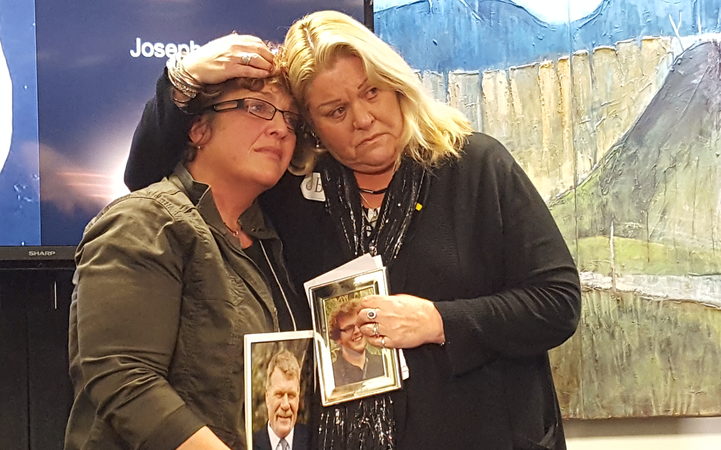 Anna Osborne, left, and Sonya Rockhouse were among family members at the signing of today's agreement Photo: RNZ / Craig McCulloch

Labour, the Greens, the Māori Party and United Future signed an agreement this afternoon, pledging to set up an agency to take over and re-enter the mine.

Anna Osborne, whose husband Milton died in the 2010 disaster, said the signing was a "huge victory for justice".

"The fight that we thought was over a few years ago has now re-ignited ... This is history in the making."

A spokesperson for the families, Bernie Monk, said it was a moment he would remember for the rest of his life - "a moment when right won out".

Mr Monk, who lost his son Michael in the mine, said the "historic commitment" meant they were closer than ever to "recovering our boys".

"Our experts overseas - who are renowned - know that this job can be done. We want our men home. You know that it can be done. And we're going to make it happen."

The agreement commits the MPs to "safely re-enter, fully recover, make safe and comprehensively investigate the Pike River mine drift".

"We will immediately create within the new government a Minister responsible for Pike River Re-entry," the statement said.

The new agency would devise a plan to fully stabilise the drift by the end of 2018 - so any human remains or evidence could be recovered.

"Of course we're going to act responsibly. Safety is top of mind. But you cannot put a price on someone's life and their family member's ability to have closure."

It was unacceptable that the families of victims still did not have answers seven years on, she said.

"Twenty-nine people shouldn't die at work in New Zealand, nor should even one person lose their life while earning a living."

United Future leader Peter Dunne said he had initially thought nothing more could be done, but had since changed his mind.

He had become increasingly uneasy as new information emerged, he said.

"For me, it's been quite a difficult journey. It pales in comparison though to the journey the families have been through.

"And I cannot imagine for one moment [the] seven years of anguish, uncertainty, grief and a sense that no closure has been able to be achieved."

New Zealand First leader Winston Peters has previously pledged to re-enter the mine, even volunteering to go in himself.

But he said he would not be signing the latest agreement as the families deserved better than "a PR stunt".

"We just need political commitment and I gave mine a long, long time ago to the people of Pike River down on the West Coast," Mr Peters said.

"Back then, the Labour Party was promising a review. Remember? I don't like people using death and misery for political reasons."

"No amount of political statements in a pre-election period change the fundamental fact that getting men into the drift has been deemed by a thorough examination to be unsafe," Dr Smith said.

The government has commited to unmanned entry of the mine with robots, which was planned to be completed by Christmas.

But Dr Smith said the government would not put more people at risk by sending them inside.

Solid Energy, which bought the mine in 2012, is due to be wound up in March next year.

Dr Smith said at that point, the mine was set to be transferred to the Conservation Department to become part of a national park.