The government is denying there is anything new in the latest footage from inside the Pike River Mine, which shows unburnt rubber hoses and wooden pallets.

But a mother of one of the victims says the footage raises serious questions about the government's refusal to re-enter the drift to look for evidence.

The remains of 29 miners have been trapped in the mine since it exploded in 2010.

The just-released footage, which is almost six years old, appears to show rubber hoses and wooden pallets that were untouched by the fire.

The mother of one of the victims, Sonya Rockhouse, said another segment of footage even showed a pair of glasses that could have belonged to her son, Ben.

"New Zealand has been told there's nothing but ashes and dust down there, they've been told that the drift can't be made safe to enter and investigate. That's just not true, my boy is down there - and if pallets and paper are intact then so is his body," she said.

"[Prime Minister] Bill English has tried to keep us quiet with the promise of getting cameras into the drift, but in the five months since that promise has been made all that has happened is a couple of meetings and a vague suggestion it might happen by November.

"It feels like they're more interested in making this go away until after the election than in getting answers."

Mr English told Morning Report the footage had been around since 2010.

"I don't think it fundamentally changes what's going on," he said.

He could not comment on whether the miners' families had been misled into thinking that fire had engulfed the entire mine, he said.

He also could not confirm whether the Royal Commission that investigated the explosion had seen that footage "precisely".

"That would have to be checked." 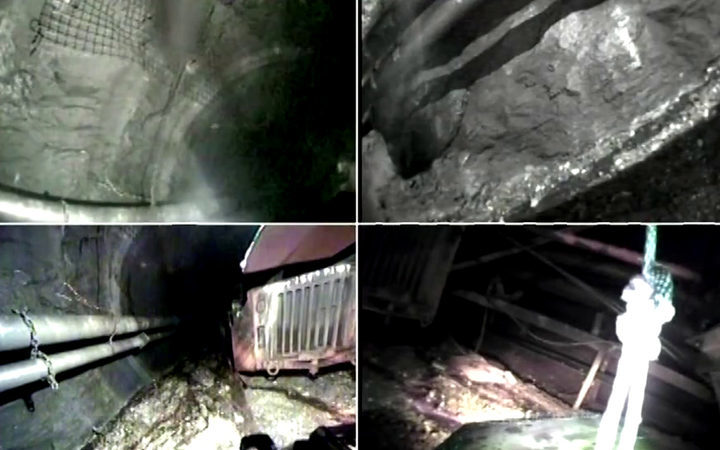 Previously released footage shows a robot and two mine safety workers inside the mine's access tunnel, about three months after the deadly 2010 disaster. Photo: Supplied

However, he would be "surprised if there's too many aspects of this that haven't been thoroughly looked at".

The government was still working with the families to get cameras and robots into the mine tunnel to collect further video evidence, Mr English said.

That should happen within the next six months.

'All this material has been available'

The minister responsible for Pike River, Nick Smith, said earlier that the government never claimed the entire mine caught fire, rather that it was at risk of fire and unsafe to re-enter.

"There is nothing new in the latest footage published - all this material has been available to families since 2011 and was assessed as part of the risk assessment that concluded manned entry was unsafe," Dr Smith said in a statement.

"It has never been claimed that the entire mine underground was combusted - what has been stated is that the entire mine is at risk of fire if methane, oxygen and a source of ignition is present. The footage is from the deepest section of the mine, and even the families' expert has said manned entry to this area is not possible.

"The government remains committed to answering the families' queries through unmanned entry options and that it is progressing as fast as is possible."