Kennedy Graham and David Clendon are both part of a tranche of Green MPs elected to Parliament over the last decade as the party's base support has grown. 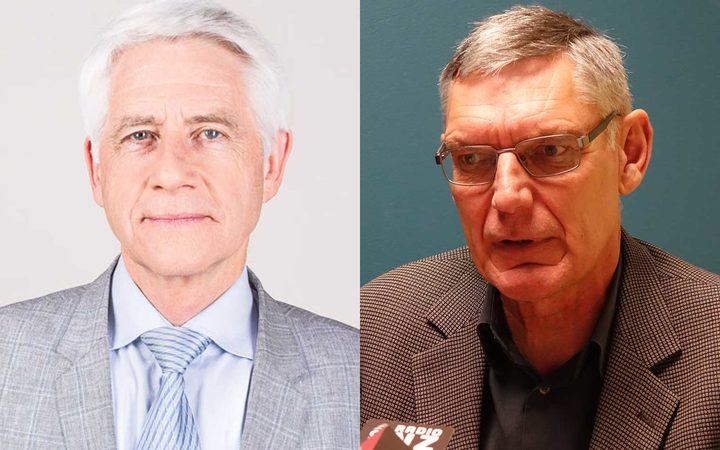 Kennedy Graham, left, and David Clendon said they had lost confidence in their co-leader and regarded her position as untenable. Photo: Supplied / RNZ

The pair face expulsion from the party caucus after they threatened to resign if Metiria Turei stayed on as co-leader.

The party is currently meeting to decide their fate.

Kennedy Graham left a job at UN headquarters in New York to stand for the Greens in 2005.

He missed out on a seat at the time, but was elected to Parliament to 2008 on the list.

Prior to joining the Green Party, Dr Graham had a diplomatic career spanning three decades, that included helping to negotiate the South Pacific Nuclear-Free Zone in the 1980s.

He has also lectured on international relations at Victoria and Canterbury universities.

Over the years, he also gained a reputation as a leader on climate change policy. He attended the first United Nations conference on the issue in Rio de Janeiro in 1992 and was at the negotiations of the 2015 Paris Agreement.

He headed a cross-parliamentary group of MPs, GLOBE New Zealand, that last year released a report mapping out a way for New Zealand to meet its emissions target.

"I don't think anybody else in New Zealand has done more than he has to build cross-party consensus and to change the conversation about climate change in New Zealand. I'm very upset to lose him."

Until his resignation he looked set to serve a fourth term as a Green MP, moving up three places to eighth on the Greens' list.

David Clendon has been a member of the Greens since 1990, when the party was in its infancy.

Nearly two decades later he become an MP after missing out in 1999, 2005 and 2008, before finally coming into Parliament in 2009 on the list to replace departing MP Sue Bradford.

During that time he held senior positions in the party. He served as co-convenor from 2001 to 2004 and ran unsuccessfully for the co-leadership after Rod Donald died suddenly in 2005.

Mr Clendon left school at 15 and worked his way into business, ending up managing an engineering supplies company.

He has taken a particular interest in corrections and criminal justice, regularly visiting prisons and defending prisoners' rights.

When the Green Party released its list rankings earlier this year, Mr Clendon was the lowest-ranked current sitting MP - bumped to 16 in favour of new candidates such as Chlöe Swarbrick and Golriz Ghahraman.