A government-ordered inquiry into New Zealand's retail fuel market has found petrol prices "might not be reasonable".

The Fuel Market Financial Performance Study was commissioned by the Ministry of Business, Innovation and Employment after many complaints about the cost of petrol.

It found the sale of petrol was probably not always properly competitive, but not all information needed to get to the bottom of the problem was able to be gathered.

The market had features which "may not be consistent with a workably competitive market", its report said.

"There are parts of the market that we need to look at more closely to make sure the market is as competitive as it can be."

The study found retail fuel margins had increased significantly over the last five years while fuel margins for aviation and commercial road users had been flat or falling.

Higher petrol prices in the South Island and Wellington were not explained by higher costs in those areas. 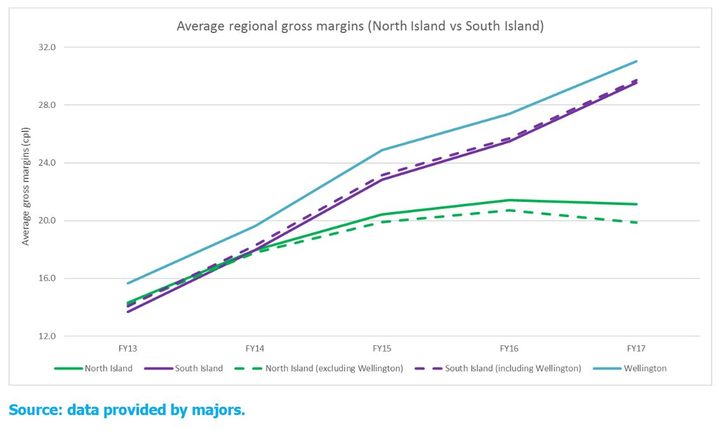 This chart shows gross margins - the difference between what companies pay and what they sell petrol for - over the last four years. Photo: Fuel Market Financial Performance Study

Minister of Energy Judith Collins said there were difficulties in comparing the information received from the companies, and some very specific information that was required could not be obtained.

"As a result, the study doesn't definitively answer whether fuel prices are reasonable or not."

It was a very complex area, the minister said.

"I have now instructed my officials to assess the recommendations of the study and report back to me by November.

New powers announced recently by the government would allow the Commerce Commission to undertake a further competition-specific fuel market study, she said.

This would be backed by the ability to require comparable data across companies.

There was currently no legal mechanism to do this.

AA spokesperson Mark Stockdale said it vindicated what the organisation had been saying for some time - that the increase in margins was not fully explained by cost rises.

"It's worth investigating to see if something can be done to improve price competition, particularly in Wellington and the South Island where prices are higher."

General manager Dave Bodger said his company can only store petrol at its site near the port of Tauranga, which means it cannot sell south of Levin.

But he said prices would come down if independent companies were allowed access to a port in the South Island - such as Lyttelton or Timaru.

"We can't get fuel into the South Island or effectively into Wellington to open sites, but if there was open terminal access, then potentially us and others could bring greater competition."

Z Energy insisted the petrol market was competitive and that its economic returns were reasonable and in-line with domestic and international peers.

It said the barriers to market entry by new energy companies were low, and independents now account for 20 percent of the retail market.