Power Play - The new Cabinet line-up revealed by Bill English is not so much a new face, but the same face with a touch of powder and some new lippy. 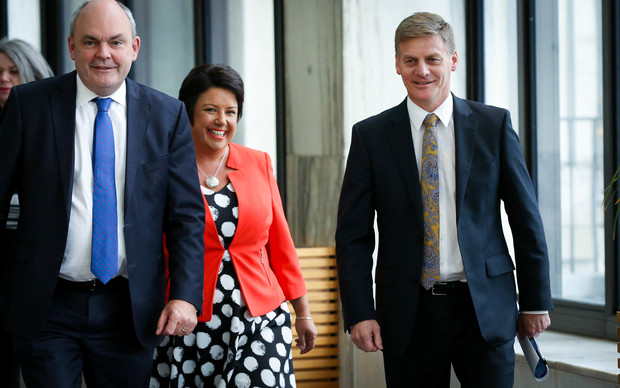 Many of the big portfolios, including health, education, defence, foreign affairs, justice and responsibility for the intelligence agencies, remain the same - for now.

Education Minister Hekia Parata and Foreign Affairs Minister Murray McCully will leave Parliament at the next election and their portfolios will be reallocated in May.

Nikki Kaye is still away receiving treatment for breast cancer and she is the "likely" candidate to take up Education next year.

She is clearly the person Mr English wants to take over that portfolio, but he says he does not want to put her under pressure, and he would also want to be sure it is a load she can carry once she returns.

Mr English has also wrapped Foreign Affairs up in a neat little package.

When announcing his imminent retirement next year, the long-serving Murray McCully left it up to Mr English to decide whether he would stay on as Foreign Affairs Minister in the meantime.

That was alongside a statement from Mr McCully earlier this year that he would only stay on in Parliament as long as he had that portfolio.

If he had kept to that and been demoted, that would have prompted a second by-election in Auckland at the start of next year, alongside Mt Albert after the departure of Labour's David Shearer.

Mr English says foreign affairs is not an area he knows well and Mr McCully will help with the transition for the next six months.

That will of course be of value to him as a new prime minister, but this arrangement also keeps Mr McCully happy and in Parliament long enough not to spark a by-election.

Much of the responsibility for housing, an issue the government has failed to get under control, has been consolidated in the able hands of Amy Adams, who keeps Justice, but picks up Social Housing from Paula Bennett and Housing New Zealand from Mr English himself.

Labour is already claiming that change is to avoid the embarrassment of facing up to the government's failure in this area.

Mr English says nothing will change with Dr Smith's delegated responsibilities, and he will remain responsible for key projects like the Special Housing Areas - but, if that is the case, why change the name of the portfolio?

Judith Collins and Jonathan Coleman were the two other contenders for the leadership; they bowed out when it became obvious Mr English had the numbers.

It is always interesting to see how defeated rivals are dealt with by the victor, and in this case Mr English has played it safe.

Both Ms Collins and Dr Coleman have dipped slightly in rankings, but nothing to cause them any abject humiliation.

However, Ms Collins has lost Corrections and Police and has been given Revenue, Energy and Ethnic Affairs: portfolios that require some work but will not give the outspoken minister the headline-grabbing opportunities she had before.

Dr Coleman retains the hefty portfolio of health, as well as sport - always a ministerial ticket to glamorous international sporting events - and would have to be a strong contender for the foreign affairs role next May.

Simon Bridges campaigned (unsuccessfully) for the deputy leadership as the "voice of the backbench", channelling the frustration of the lower ranks of the caucus about being cut out of policy development and having a say about the operation of the party and the government.

He has probably benefited the most in this reshuffle with a number four place in the Cabinet, and is now solidly in the senior decision-making ranks.

He has taken over Economic Development from Steven Joyce and has picked up an associate finance delegation, but even before his deputy bid he was always seen as a minister on the way up, and his promotion might not be well beyond what he would have got under the planned reshuffle under John Key at the start of next year.

The leadership team gave a nod to the message of the need to refresh and rejuvenate, in the form of Alfred Ngaro going straight into a Cabinet position to replace the outgoing Sam Lotu-Iiga as Minister for Pacific Peoples, and Mark Mitchell and Jacqui Dean being appointed as ministers outside of Cabinet.

Mr English says these changes will be enough to soothe the backbenchers with several new ministers in the executive by next May.

However, Mr English has to pitch much more broadly than his own caucus.

It is the public who will either vote him in or out at next year's election, and apart from the sector groups who work closely with government ministers, many voters would hardly notice a difference.