Education Minister Hekia Parata will stand down at next year's election, saying her time with the portfolio has been very challenging but very rewarding.

She said she advised Prime Minister John Key of her decision earlier this year.

A National list MP, Ms Parata was elected to Parliament in 2008 and has been Education Minister since 2011.

During her announcement at Parliament, Ms Parata gave no specific reason for leaving, except to say it was the right time for her to move on.

"I've had the opportunity and significant support to put in place a reasonably comprehensive system reform and I think therefore at the end of that I will have made my contribution and it will be an opportunity for someone else."

Apart from having a "spring cold", there were no health issues prompting her departure, she said.

Ms Parata had a rough start to her time as Education Minister, coming in for criticism after the government's attempts to increase school class sizes failed.

She also managed the schooling system in Christchurch after the earthquakes, which included some closures. 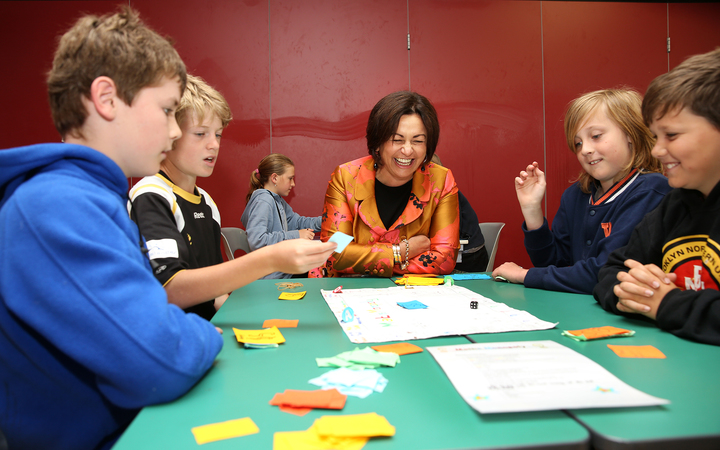 Education Minister Hekia Parata announces $10 million for maths and science teaching around the country, at Ridgeway School, in 2013. Photo: RNZ

Since then Ms Parata has implemented a new policy paying some teachers and principals more to play lead roles in groups of schools, but the policy has had a slow start.

A major overhaul of the way schools are funded and run, including a review of special education, was now under way, but she told media it was "not her plan to leave unfinished business".

"In terms of the funding review that's a matter that I'm discussing with Cabinet at the moment, it's still on its own timeline.

"All of the components of my work programme are on time."

Ms Parata said she would stay in that portfolio as long she had the backing of the Prime Minister, before her departure from Parliament.

She acknowledged her time in charge of it had not always been easy.

That had been largely driven by parents' expectations, which she respected and had worked hard to try to meet, she said.

"I respect that from New Zealand parents, they want to know the best it happening for their kids and so they do take this personally, I take it personally.

"So has it been challenging - yes, has that vanquished me - no."

During her time as minister, Ms Parata has had a fraught relationship with teacher unions.

But she said, over time, the relationship had improved and described it as one of "mutual respect", after her efforts to consult early and include union representatives throughout the decision-making process.

She said rejuvenation was important and there were plenty of talented backbenchers ready to take her place, although she declined to name the person she believed should succeed her.

Ms Parata said she had no intention to seek a diplomatic posting once she resigned from Parliament, and had no specific plans for another job.

Cabinet reshuffle not ruled out

Prime Minister John Key has not ruled out a reshuffle next year, following today's announcement.

Mr Key said, despite a few bumpy first years, Ms Parata had been a minister who was always willing to push the boundaries to improve the education system.

He still had to consider whether she would stay on as a minister for all of next year, although he said she would definitely stay on as an MP.

A small number of other ministers had indicated they were "considering their future" as election year approached, he said.