A United Nations committee has challenged the government about the discrimination faced by New Zealand children who are homeless or live in poverty. 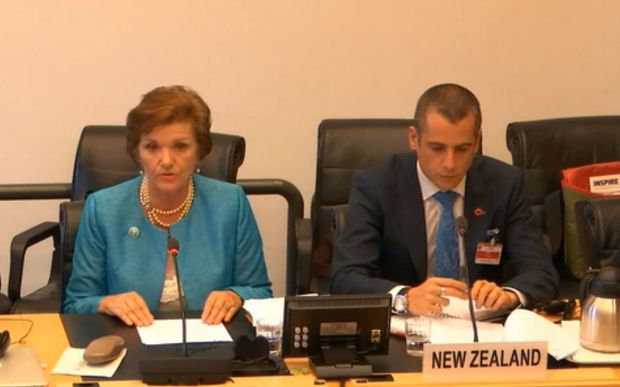 Anne Tolley speaks at the United Nations Committee on the Rights of the Child about children in New Zealand. Photo: United Nations

Social Development Minister Anne Tolley said she was looking forward to receiving recommendations from the UN's Committee on the Rights of the Child, after a "comprehensive" session in Geneva.

Mrs Tolley and a delegation of officials were questioned by the committee as part of its five-yearly report.

VIDEO: Watch the full 2138th Meeting of the 73rd Session at the UN

The panel asked a range of questions during the three sessions, Mrs Tolley said.

"The questions were pretty broad-ranging and in some cases detailed, everything from questions around immigration, asylum seekers, refugees, right through to health and education questions and even questions things like HIV/Aids."

She was impressed with the depth of knowledge the committee had about what was happening in New Zealand.

They also talked at length about the new Ministry for Vulnerable Children.

"There was some misunderstanding as to what we're trying to achieve with that but I think we had good dialogue about it."

The government delegation did not pretend New Zealand had all the answers, particularly around outcomes for Māori and Pasifika children, Mrs Tolley said.

But Unicef NZ executive director Vivien Maidaborn, who was part of the delegation, said the panel had expressed concern about the new ministry.

"The comment that was made was, 'I don't understand why you would call a Ministry the Ministry of Vulnerable Children when it could just have been the Ministry of Children. You're in danger of overtargeting towards vulnerable children at the expense of rights to all New Zealand children.'"

Children's Commissioner Andrew Becroft, who was part of the New Zealand team, said the committee had some misgivings about the government's new approach.

"The committee was really, I think, asking - we've got a lot of initiatives that are going on at the moment - is there an overarching plan that covers everything?

"Is there a comprehensive concerted plan to deal with all under 18-year-olds in New Zealand? Have we narrowed the focus unduly on vulnerable children to the detriment of New Zealand children as a whole?"