Prime Minister John Key has told the Philippine president, who has condoned vigilante murders of drug dealers, there is an "arguably better" way to deal with drug issues.

Mr Key met Rodrigo Duterte after the East Asia Summit in Laos last night and said he made his views clear on the new leader's use of extra-judicial killings. 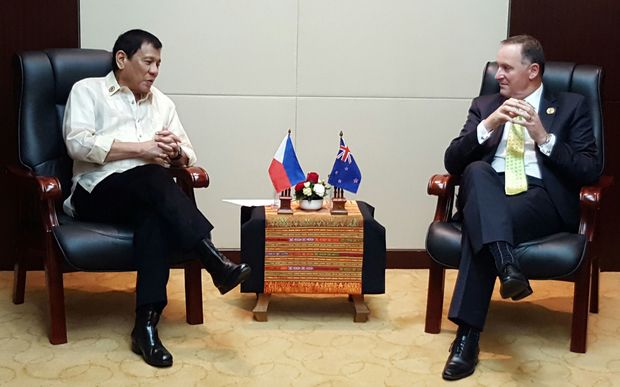 Mr Duterte, who took office in June, has sanctioned the killing of drug dealers to try to wipe out the illegal drugs trade in the Philippines.

The Philippine president has also courted controversy through his use of foul language directed at world leaders who question his actions.

US President Barack Obama had been due to meet with Mr Duterte, but cancelled the meeting after Mr Duterte called him a "son of a whore".

Mr Key said he told Mr Duterte that New Zealand had a long history of believing in human rights.

"Of course we believe that those who traffic drugs should be held to account, but fundamentally there's a way which would ensure that the innocent are not caught up in this which would be arguably better than what he's doing."

Mr Key said Mr Duterte was not overly defensive, even though Mr Key said he was quite direct with him.

He said he was reasonably sort of matter of fact, but unapologetic for what he was doing.

"He just made the point that he believes he knows how the drugs are coming into the Philippines and why it is happening, and he believes that his track record of being absolutely resolute is something that has worked.

"Now he didn't really give us a direct answer to what happens when and if innocent people get associated with what is essentially extra-judicial killings."

Mr Key said when the president spoke inside the East Asia Summit in Laos yesterday that he did talk about human rights.

"But he was using it the other way around and saying the human rights of the people of the Philippines because they are being fed drugs and therefore become addicted and that leads to a whole lot of criminal activities."