Polls have opened in the Philippines amid tight security for the country's general election. 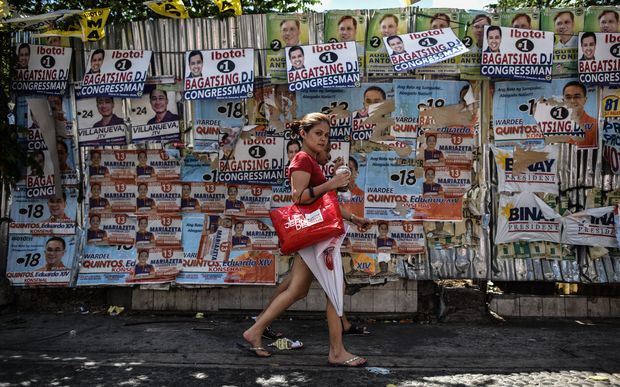 More than 100,000 police officers will be on duty, amid fears of violence.

Five candidates are in the race to become the new president. A vice-president, senators and about 18,000 local officials including mayors will also be elected.

The campaign has been marred by violence and 15 people have been killed so far during the election campaign.

On Saturday a mayoral candidate was murdered in the south.

A gunman stormed the home of Armando Ceballos, standing as an independent in the town of Lantapan, and shot him dead, police said.

Correspondents said the Philippines had a long history of political violence and dozens were killed during each election campaign.

The presidential frontrunner is 71-year-old Rodrigo "Digong" Duterte, who has run a campaign focused on law and order issues but made many controversial statements, including saying that he would butcher criminals.

A former state prosecutor, he has been mayor of the southern city of Davao for more than 22 years.

He recently joked that, as mayor, he should have been first to rape an Australian missionary murdered in a prison riot, but he later apologised.

Current President Benigno Aquino is leading attempts to bring together other candidates to defeat Mr Duerte.

He warned that if Mr Duerte is elected, it could mean a return to dictatorship.

In a final rally on Saturday, Mr Aquino appealed to voters: "I need your help to stop the return of terror in our land. I cannot do it alone."

However, candidates including Grace Poe, Jejomar Binay and Miriam Defensor-Santiago refused to step aside.

More than 54 million people are registered to vote across the archipelago of 7000 islands.

The economy, crime, corruption, poverty and territorial disputes with China in the South China Sea are all major issues.