Philippine President-elect Rodrigo Duterte will seek to return the death penalty, he said in his first comments to reporters since last week's election. 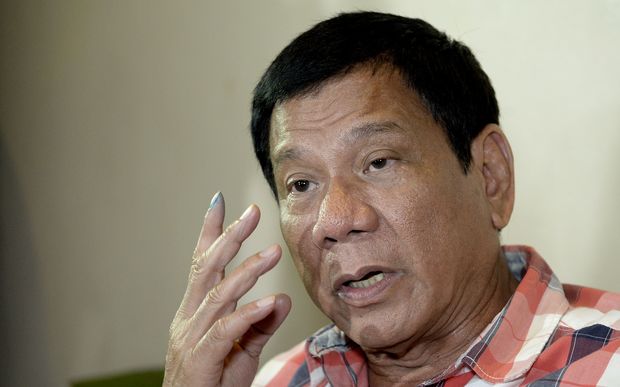 He added that he would also seek to give security forces shoot-to-kill powers for suspects who evade arrest and those involved in organised crime.

It is unclear how easily he could enact such proposals, but analysts credit his success to his tough stance on crime.

He is set to be sworn into office on 30 June for a term of six years.

While official election results have not yet been announced, Mr Duterte has an unassailable lead. He will need the backing of Congress to see through his plans.

Speaking at a press conference on Sunday in the southern city of Davao, Mr Duterte is also quoted as saying that he wanted to forge closer relations with China, and that he was open to direct talks over territorial disputes in the South China Sea.

The Philippines has taken one of its claims to a court of arbitration at the Hague.

Mr Duterte's record as the crime-crushing mayor of the southern city of Davao, once notorious for its lawlessness, has earned him the moniker The Punisher.

"What I will do is urge Congress to restore death penalty by hanging," Mr Duterte told reporters. The Philippines abolished capital punishment in 2006.

Rights groups say hundreds of criminals were killed by so-called "death squads" in Davao during Mr Duterte's stewardship of the city. In 2015, Human Rights Watch described Mr Duterte as the "death squad mayor" for his strong-arm tactics in Davao.

Whether Mr Duterte is able to persuade Congress to back such policies remains to be seen.

Last week his spokesman put forward a series of proposals such as a ban on alcohol in public places and a "nationwide curfew" for children.

Mr Duterte was not afraid of courting controversy throughout his election campaign. He vowed to give himself and members of the security forces immunity from prosecution after leaving office, saying: "Pardon given to Rodrigo Duterte for the crime of multiple murder, signed Rodrigo Duterte."

Duterte: From 'Punisher' to president