People should continue to be wary of using the ride-sharing company Uber, with dozens of drivers suspected to be operating illegally, the Transport Minister says. 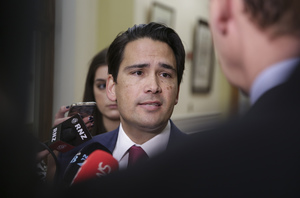 Simon Bridges said he wouldn't be shutting the company down, but urged the Transport Agency to step up its crackdown on the drivers.

In April, Uber changed its rules, dropping its requirements for drivers to have a passenger endorsement for their licence, or a certificate of fitness for their car.

Mr Bridges said that meant Uber users could be in cars with drivers convicted of serious crimes, or who were medically unfit to drive.

"Some drivers don't have 'P' endorsements and that seems to be actively encouraged, that's ... not only unlawful, but it doesn't give us any assurance of safety.

"And so we are actively enforcing that, and we're also looking at some other legal options, like what can be done in relation to Uber as a company."