The Green Party wants Corrections Minister Judith Collins to apologise to a gang member for stopping him from volunteering in a prison. 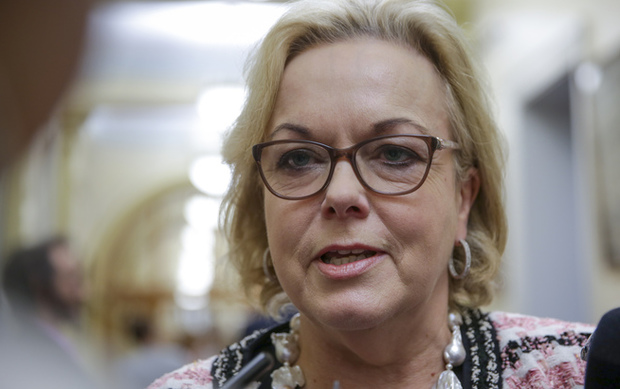 Ngapari Nui had been helping out at Whanganui Prison for five years without a reported problem, but Ms Collins said earlier today that was wrong and the only place for patched gang members in prison was behind bars.

Mr Nui, who the Department of Corrections said was a patched member of Black Power, has been stood down from his duties.

Green Party MP David Clendon said gang members should be allowed to volunteer, and police often worked with them to help deter others from following a life of crime.

"You get a gang member in his 40s or even 50s with grandchildren and he knows he doesn't want those kids going down the same path he took.

"They are doing some really positive work with those young men to keep them away from offending, out of prison, and if the minister doesn't know that, then her relationships with her senior police officers are clearly not all they should be," he said.

Ms Collins has asked Corrections to find out if there were any other active gang members working in prisons.

Corrections chief executive Ray Smith said Mr Nui had declared his gang connections at the time of his application, but had only stated he was a patched member of Black Power more recently.

Mr Smith said gang membership was a conflict of interest, and the department would be more explicit about that in the future.

The department was now working with the cross-agency Gang Intelligence Centre to review all of its volunteers for conflicts of interests, he said.

Labour's Kelvin Davis agreed the situation was compromising for Corrections.

"There would always be a cloud hanging over the work they're doing, who they're associating with, what information may, or may not, be being passed between the gang member and associates.

"How does that gang member relate to other gang members? There's just too many questions for it to be safe."

Te Rūnanga o Ngāti Ruanui Trust said Mr Nui was appointed by the iwi to work with prisoners and, in all the years he had been in the role, there had never been a reported problem.

Kaiarataki (spokesperson) Debbie Ngarewa-Packer said he was a tireless volunteer worker in his community, and had never hidden who he was.

"Most days you will find him driving our moko to kōhanga, kura and coding computer classes to ensure our young ones get the best start in life.

"He holds paepae at tangi, respects and connects with kaumatua and is actively involved with marae activities."

Ms Ngarewa-Packer questioned why the matter was being raised now.

"After five years as a successful and respected kaiwhakamana in all prisons, this is now being brought up as an issue."