A Labour government would ban foreign trusts from operating in New Zealand if they are found to be of no value, Labour leader Andrew Little says. 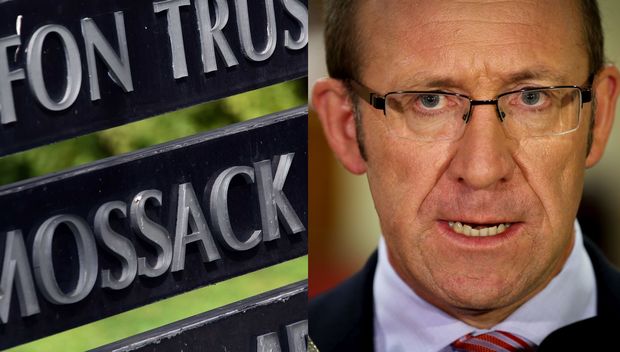 There are claims in the Panama Papers that New Zealand's tax rules are being exploited by foreign trusts aimed at helping people to avoid paying tax in their own country.

The Panama Papers claim that New Zealand's tax rules are being exploited by foreign trusts aimed at helping people to avoid paying tax in their own country.

The documents, leaked from Panamanian law firm Mossack Fonseca, have shown how some wealthy people use offshore firms to evade tax and avoid sanctions.

Mr Little said he knew little about foreign trusts before the claims were made public, and the only argument he's heard in their favour is that they generate about $24 million a year in fees for lawyers and accountants.

"There's more constructive ways that lawyers and accountants can earn their keep than helping the mega-wealthy from the rest of the world avoid their tax responsibilities.

"This is causing huge embarrassment to New Zealand and it's just not something that we should be part of."

But Prime Minister John Key said it would be a dangerous decision to ban foreign trusts from operating in New Zealand.

"It would be I think be a dangerous decision to make as a knee-jerk reaction just to ban a foreign trust overnight, because we have very good tax rules, they're integrated rules and they're respected around the world.

Mr Key said foreign trusts had played a legitimate role in New Zealand and an outright ban could have unintended consequences, in that it would concern others who operate tax structures in New Zealand.

Mr Key said if there were parts of the tax laws that need changing, the government would act.

He said while he wasn't an advocate for the industry, New Zealand had a role to play as a provider for financial services.

On Tuesday next week the International Consortium of Investigative Journalists will release a searchable database with information on more than 200,000 offshore entities, that are part of the Panama Papers investigation.

Mr Key said New Zealand was working with other countries and the OECD to close down tax loopholes and a review of the law around foreign trusts was already under way.

He said the Inland Revenue Department (IRD) would set up a small team to review any information in the Panama Papers that related to New Zealand, once those parts of the papers were published.

Mr Baucher said he would be surprised if such a group did not already exist within the IRD.

"As soon as the Panama Papers were released every tax authority around the world would be wanting to get a piece of that. They'll be waiting to see with great interest what comes out on 9 May, so they will be setting up specialist people to trawl through the papers and start cross referencing. It'll become a great data mine."

Mr Baucher said that when the names were released, tax authorities would cross-reference with records they held, and if there were any anomalies or new discoveries then the "please explain" letters would follow.

He was confident that anyone implicated would feel the full force of the law.

"Inland Revenue has got enormous powers, and this is something that has always been the case.

"Once we have a name - once Inland Revenue have a name - they can go to the bank and say we want to know about this and the banks have basically no power to stop them doing so under the Tax Administration Act."

Reference to Cook Islands and PM no accident - Peters

The anonymous leaker of the Panama Papers yesterday accused Mr Key of being "curiously quiet" about New Zealand's role in enabling the Cooks to become a "financial fraud mecca".

Mr Key responded by saying New Zealand was only responsible for the islands' foreign affairs and defence, and that the leaker might be confused by the fact that New Zealand and the Cooks shared a currency.

But New Zealand First leader Winston Peters said the reference to Mr Key was not accidental.

"The Prime Minister has turned a Nelsonian eye to these developments even though the history of the Winebox - and given his so-called expertise being a Merrill Lynch man, and an expert when it comes to money - would suggest that he must have known, or he has turned a blind eye to what's going on."

And Mr Little told Q+A the government should be using its influence to put pressure on the Cook Islands to tidy up its tax policies and administration.

"They're not only a South Pacific island nation in our backyard, we have a special relationship with them. We provide aid to them, we can influence them and we ought to be using what influence we've got to make sure they conduct themselves in a proper way."

Mr Baucher said the prime minister was correct in saying that tax policy was not part of New Zealand's responsibilities for the Cook Islands.

"Tax policy is the domain of the Cook Islands government and we have this tax information exchange agreement, which is a fairly standard agreement. We have dozens of these around the world," Mr Baucher said.

The tax information exchange agreement between the two jurisdictions was signed in 2009.

Mr Baucher said it was an agreement between the two countries to exchange information on request by either of the two parties.

"It's a step on the way to what the Organisation for Economic Co-operation and Development (OECD) is working on, called automatic exchange of information, where all this information will be automatically supplied. At the moment it's done by specific request."