Prime Minister John Key used a meeting with India's president today to push for a free trade agreement with India, he says. 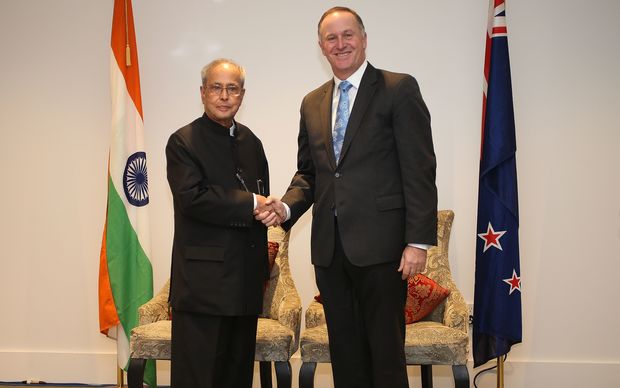 Pranab Mukherjee, who is the first Indian president to come to New Zealand, flew into Auckland yesterday for a three-day official visit.

He held a bi-lateral meeting with Mr Key this afternoon.

Following the meeting, Mr Key said the lack of a free trade agreement was holding back the relationship between the two countries.

"If you think about the demographics in India, they're very similar to those in China - so while we're doing well with India, in reality we could be doing a lot better," he said.

"So you can see what opportunity there is."

Mr Key also used the meeting to lobby for Helen Clark's bid to become Secretary-General of the United Nations.

"He had high personal regard for Helen Clark... He also made the point that he could see the strong merits of a woman being in the top job at the United Nations, so I got the impression that they would look very closely at her candidature."

Mr Mukherjee is due to leave New Zealand tomorrow afternoon.

In the year to March 52,000 New Zealanders travelled to India, while nearly 60,000 Indians visited here.