Labour MP Sue Moroney has been reprimanded by her party's leader about a flag-related tweet she posted yesterday.

Just ' is you own a flash beach house doesn't mean you get to decide our flag. #democracy #FixChildPovertyInstead pic.twitter.com/aaWtejxA7P

Last week, in preliminary results, 1.2 million people voted to keep the current flag, instead of changing to the alternative silver fern design, which received 285,000 fewer votes.

Ms Moroney tweeted a picure of a large holiday home, with the silver fern flag flying on a flagpole at the front of the house.

Her accompanying comment said just because "you own a flash beach house doesn't mean you get to decide our flag". 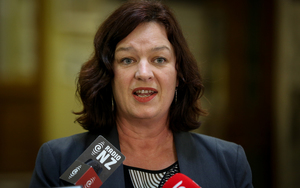 Labour leader Andew Little told reporters he had spoken to Ms Moroney about her tweet.

"I thought it was ill-judged and inappropriate, and I've told her that - I just didn't think it was a good look."

Since going into the party's caucus meeting this morning, Ms Moroney has apologised for any offence caused, via Twitter.

In her tweet she said no offence had been intended, she regretted posting her original comment and could see how it could have been misinterpreted.

Apology for any offence caused by my tweet yesterday - none intended. I regret it & can see how it could be misinterpreted. Of course .....

...everyone has the right to have a view on the flag.

Mr Little said he believed the rejection of an alternative flag meant New Zealand would have the debate about becoming a republic sooner rather than later.

He said issues such as poverty and unemployment would take priority under a Labour government, but the debate was likely to be triggered by events rather than driven by politicians.

"But there will come a time when New Zealanders want to have a discussion about our sense of national identity.

"It might be over who our head of state should be, it might be over the flag, but I do think now that we've rejected the alternative flag in this referendum means that it's more likely that debate will happen sooner rather than later."

Deputy Prime Minister Bill English said he didn't think there was any great constitutional change on the horizon.

"I think it'll be some time before there's any change in either the flag or some push for a republic."

The official result of the second flag referendum was set to be announced tomorrow afternoon.