Whanganui MP Chester Borrows is happy with how he behaved while driving a car near TPP protesters - one of whom says he ran over her foot. 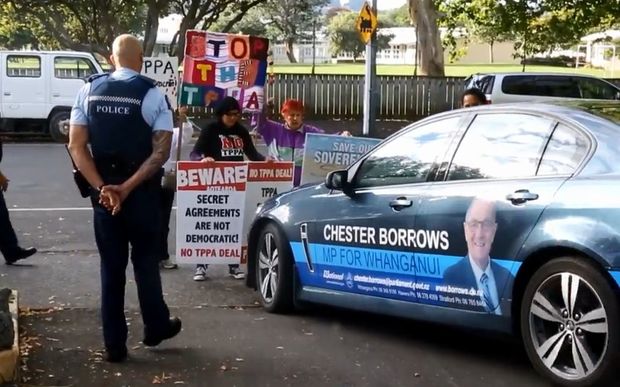 Chester Borrows was confronted by a crowd of TPP protesters on Tuesday. Photo: Wanganui Chronicle

Mr Borrows was driving himself and senior minister Paula Bennett away from a breakfast meeting in Whanganui.

The police are investigating last week's incident, which was captured on video.

The video showed Mr Borrows' car moving slowly forward towards a group of protesters, but it did not appear to completely stop.

Mr Borrows said the police had not spoken to him about the matter yet. 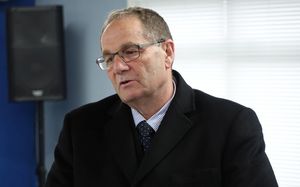 "I'm happy with the way that I responded to what was in front of me at the time and what we knew at the time, so I'm glad that the lady is not hurt, everyone has a right to demonstrate - I've done that myself in the past."

Ms Bennett said that at no time did she feel unsafe, and at the time thought Mr Borrows and the police handled the incident well.

She said the protest itself was unpleasant, with people throwing sex toys at the car.

"I just think the whole thing's really awful at the moment, but I think it's just a small group of people that have got themselves worked up into a place of anger.

"They now, for whatever reason, think that it's acceptable and appropriate sort of behaviour to do that."

Ms Bennett said she had reported threats made to her to the police about once a month, and was more concerned about how her family reacted to the threats than her own safety.

She said it would be a shame if ministers had to have heavy security because she liked how accessible New Zealand politicians were to the public.