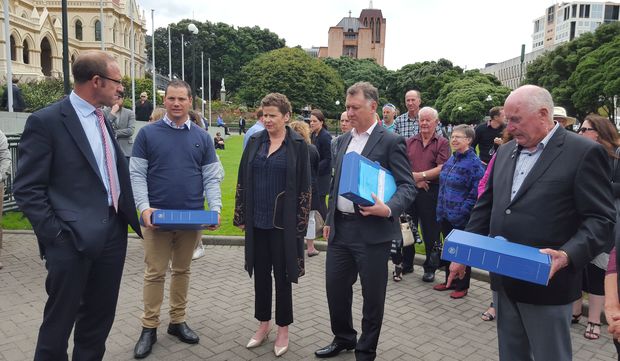 Yesterday, melanoma sufferers and their supporters delivered a petition signed by over 11,000 people to Parliament, calling for funding for immunotherapy drug Keytruda.

Mr Hague said he was wrong and insensitive to suggest the sufferers were pawns.

"I don't regard those people who came to Parliament yesterday as pawns. If I was in their position, I would have done the same thing," he said.

"In fact, I've been on all sides of this issue. When I was the director of the AIDS Foundation, I was frequently in the position of advocating for medicines that Pharmac didn't currently fund and were above Pharmac's threshold."

He had been trying to make the more general point that if politicians intervened in Pharmac's drug funding decisions it would create an environment where drug companies would focus their attention on publicity campaigns, he said.

"What I am criticising is the actions of politicians from several sides who have indicated that they would definitely fund this drug.

"As a politician, it's clear that that would be a popular decision ... but it would be the wrong thing to do."

New Zealand's pharmaceuticals budget had been underfunded by hundreds of millions of dollars and that was where the political focus should be, Mr Hague said.

Health Minister Jonathan Coleman, who received yesterday's petition, said he was optimistic there would be funding for a new melanoma treatment.

"Something inevitably is going to happen in this area in terms of Pharmac funding a melanoma drug but they're in complex commercial negotiations, they've just got to work through those."

The government would stay at arms-length from the drug buying agency and let it make a decision that was in the best interests of the greatest number of New Zealanders, Dr Coleman said.

He also said he would be making the case to increase Pharmac's budget in this year's government budget.