OPINION: It's 40 years today since Robert Muldoon was first sworn in as Prime Minister. NZ On Screen's youngest writer Simon Smith looks back on a legacy he shouldn't be able to remember, but is so enormous he can't avoid it. 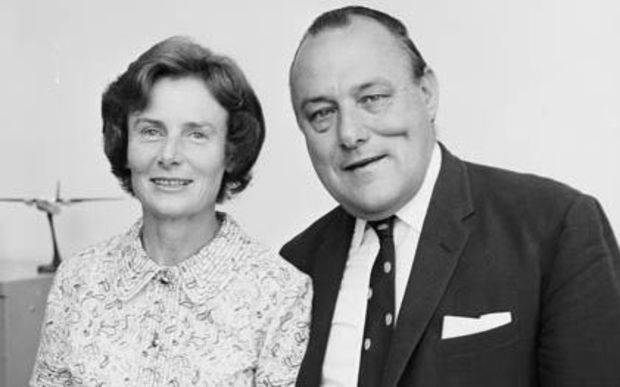 For many Kiwis, who like myself are under 30, the name Robert Muldoon is nothing but a legacy, an abstraction of politics at both its most ruthless and most bizarre.

Muldoon was the first prime minister to really hit the television age, and his ferocious on-screen persona has become the stuff of legend. The 40th anniversary of him coming to power is the perfect time to look back through NZ On Screen Muldoon TV moments and see where the legend came from.

Muldoon's bold style is clear from the outset in this interview on Tonight with Simon Walker. With clear disregard for any notion of being friendly or personable, Muldoon leaps straight into defining for Walker how the interview will play out.

When Walker tenaciously continues the interview undeterred, Muldoon becomes increasingly aggravated, throwing accusations of poor journalistic integrity. Things go from bad to worse however when Walker dares to venture off script - "I will not have some smart alec interviewer changing the rules half way through."

Check out the Tonight interview

Eight years after his famous interview with Walker, Muldoon was still prime minister, although his majority vote was lying in ruins and he was dealing with dissent from within his own party. Here, in the corridors of power and with his back to the wall, Muldoon shows himself to be defiant to the end.

Described by the press as being in "high-spirits" (allegedly full of spirits), Muldoon declares a snap election live on national television. Brave or mad?.

With the snap election six days away, Muldoon was once again appearing on screen, this time opposite Labour leader David Lange for the leaders' debate.

Muldoon begins at his feisty best, continually interrupting Lange with sarcastic jabs. When host Ian Johnstone describes the pair as "the two giants of the political scene," Muldoon interjects "well I wouldn't claim that."

As the interview continues, however, Muldoon's schoolboy arrogance wears off, and he concludes with possibly the most bizarre phrase ever heard in a political debate: "I love you, Mr Lange."

Playing a cameo role in 80s kids TV show Terry and the Gunrunners seems very out of character for the ever grouchy Muldoon. Luckily when his character is revealed, he's the same as ever as he barks out orders to the show's mysterious but dim duo Thompson and Crouch.

When it's revealed the inept men he orders around are government agents, it almost seems as if his cameo was an ironic joke he just wasn't in on.

Watch Terry and The Gunrunners - episode one

Muldoon left behind a controversial legacy unmatched by any other prime minister, as evidenced in a 1994 documentary made shortly after his death.

A critical view of the former prime minister, this documentary prompted complaints to the Broadcasting Standards Authority by both Muldoon's widow Thea and son Gavin, which were partially upheld.

It's not a flattering portrayal, but it's certainly a fascinating watch.

Watch The Grim Face of Power