The Chief Ombudsman is putting government agencies on notice for their compliance with the Official Information Act (OIA).

Over the past year, Dame Beverley Wakem has carried out a comprehensive review of the operation of the OIA by investigating the practices of 12 selected government agencies under it.

The report found some ministerial officials had tried to limit the scope of information released under the act, and there was a level of distrust among those making OIA requests.

It found 78 percent of agencies had no policies in place for the proactive disclosure of information.

Dame Beverley said people wanting information often found it difficult to articulate their requests, as they did not understand how the information was held. Agencies, meanwhile, were reluctant to engage with them directly so extended the response time limit.

She said many people assumed the lack of engagement was deliberate, which had created a cycle of distrust and suspicion.

"This has led to increased concern and criticism about how the OIA is operating. This situation is compounded by mixed messages from ministers and chief executives and, in many cases, the absence of high-quality training on the act," she said

Dame Beverley was satisfied that, overall, agencies were compliant with the OIA and government officials working within agencies had a genuine desire to ensure they were compliant.

However, for people seeking information about contested policies or activities, many agencies' processes made them vulnerable to not complying with the law. 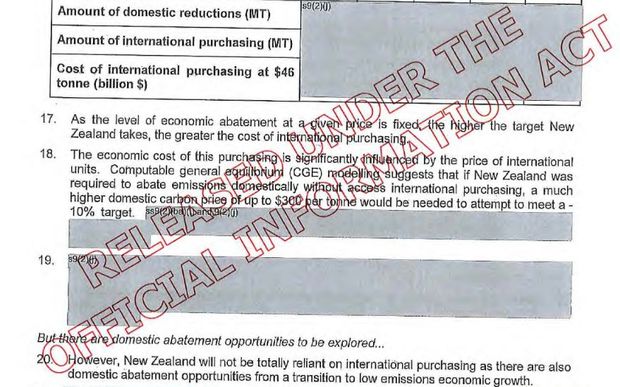 An example of documents obtained under the Official Information Act. Photo: SUPPLIED

The chief ombudsman would be keeping a close watch on agencies to make sure they were open and improved their practices.

"The public needs to know their requests for access to official information will be treated appropriately and in accordance with the law by ministers and their agencies."

She said government agencies needed to better train their staff in the operation of the law.