The acting head of the Government Communications Security Bureau (GCSB) says it is disappointing her planned speech this afternoon was hijacked by protesters as she was going to reveal operational details never previously discussed.

Una Jagose was about to deliver an address to a Privacy Commission technology forum at the National Library in Wellington when two anti-GCSB protesters unfurled a banner in front of the podium and refused to move.

One man from the audience appealed to the two women to allow Ms Jagose to speak, as that was what they were there to hear, but the protesters said they intended to remain for the duration of the speech.

Privacy Commissioner John Edwards then decided to cancel the event.

"So it was a shame that one stopped the other from going ahead today."

The Cortex cyber security programme used by government agencies and some large New Zealand companies became highly controversial during last year's election campaign, as part of broader coverage about the operations of the GCSB. 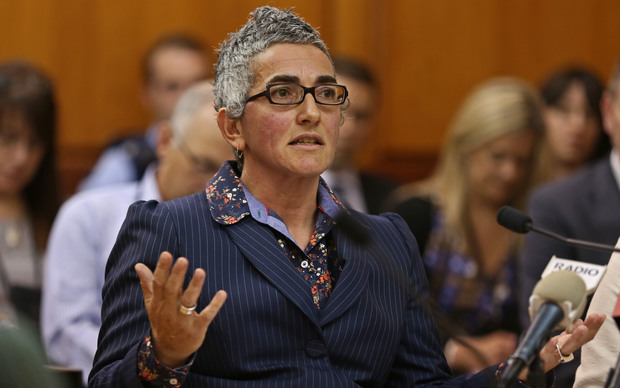 Ms Jagose said she was very happy to field questions from the audience, but not to deliver her speech over the top of the protest banner.

"I was going to talk about the work that we do both in foreign intelligence and cyber defence, and talk about the systems of oversight and the controls that are in place.

"I was going to talk a lot more about more than we've ever talked about before in public about our cyber security programme, called the Cortex programme - how we look at the privacy interests related to that programme, how it works, how it's controlled, what it is.

"Stuff that we've never said before."

Ms Jagose said she would still get more detail out to the public and would reschedule her speech for a later date.

Mr Edwards said, in his view, the protesters were there to disrupt and prevent the messages from coming out, and he wasn't prepared to subject his guest and the audience to the "spectacle of people being dragged out" by security.

"That would have suited the protesters, I'm sure, to have been able to garner more media attention and to shout their message but there's no need for that.

"This is about freedom of speech; if they use their speech to shut down this really important development in the opening up of the organisation, then I think they've acted counter to their interests frankly."