A national spy conference has been targeted by protesters calling for the Government's spy agencies to be axed, not just reviewed. 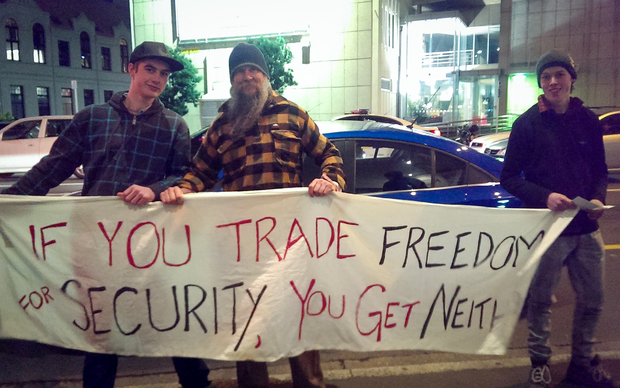 The group from the Stop the Spies coalition gathered in front of the venue hosting the Intelligence Conference in Wellington yesterday.

The meeting which involved high-ranking Government intelligence officials, cyber-security companies and privacy and intelligence experts was closed to outsiders, despite its main focus being on transparency.

The Stop the Spies coalition said the Government Communications Security Bureau and the Security Intelligence Service should be abolished, and New Zealand should get out of the Five Eyes agreement.

Protester Adrian Leason, who was one of three men who in 2008 damaged the GCSB listening station at Waihopai in Marlborough, said that veil of secrecy is what was wrong with the spy agencies.

"In a modern, democratic society we want transparency and accountability," he said.

Mr Leason said the agencies which had been funded to the tune of $1 billion over the past 25 years were living in the cloak and dagger shadows and did not have to account to anybody.

He said the GCSB and SIS had caught no spies nor apprehended any terrorists.

Adrian Leason said there needed to be some sort of cost-benefit analysis carried out.

Political activist Valerie Morse said people needed to be aware of how much the intelligence industry had grown in New Zealand over the past 10 years.

"These are agencies that have grown massively since the start of the war on terrorism and we are calling for their abolition," Ms Morse said.

She said the review was a public relations exercise and the agencies did not have any legitimacy.

She said no oversight of the GCSB or SIS was sufficient.