The Prime Minister has described his repeated pulling of an Auckland waitress' hair as just ''horsing around''.

John Key apologised to the waitress and gave her bottles of wine, after she finally made it clear she was not enjoying the attention.

In a blogpost the waitress today said the first time the Prime Minister pulled her hair she thought he was probably trying to be playful.

She said it started during last year's election campaign and happened several times through until last month, and she became increasingly annoyed each time.

The waitress said her manager told Mr Key on one occasion that she did not like it, then in late March she told him herself.

Mr Key told TVNZ that he and his wife were regulars at the cafe.

"I've been going there for years. We have a fun relationship. There is always lots of horsing around and lots of practical jokes and that's really all there is to it."

Mr Key was asked whether it was behaviour befitting of a Prime Minister.

The lady at the cafe was lucky John wasn’t packing his scissors pic.twitter.com/5pjw8fV6ly

So John key thought it was ok to repeatedly pull a woman's ponytail. He's our freaking prime minister. Sack him

"Look in hindsight, no, but in the context of, you know, we have lots of fun and games there and there are always lots of practical jokes and things, you know, it's a very warm and friendly relationship, in that context you'd say yes but if you look at it now, no.

"When I realised she took offence by that, I just sort of immediately went back, gave her some wine, apologised, and told her I was terribly sorry."

She says he should not be making light of it by labelling it ''horsing around''.

"It shows that actually the apology he gave the young woman wasn't genuine, because he's just made fun of her, he's made fun of the whole incident.

"So I think the Prime Minister needs to properly apologise to the young woman and then to be very careful, because I think he's just had his Roger Sutton moment."

John Key should be held to the same standards as the rest of the country, she said.

"This is very weird behaviour by the Prime Minister. It is bullying and intimidating behaviour. I'm very surprised that he didn't listen to the warning, both from the woman and from those around him, It shows that he is out of touch, that he is not keeping any sort of check on his behaviour."

And employment lawyer Andrew Scott-Howman said if the event had happened in a workplace between two workmates it would be considered harassment.

"If you are the Prime Minister, you can never stop being the Prime Minister and something that you do in your own time which is perhaps intended to be a friendly or playful kind of intervention, if you like, with somebody in a cafeteria - that can have ramifications for your professional life."

The cafe directors said they would not comment on employment matters in public. 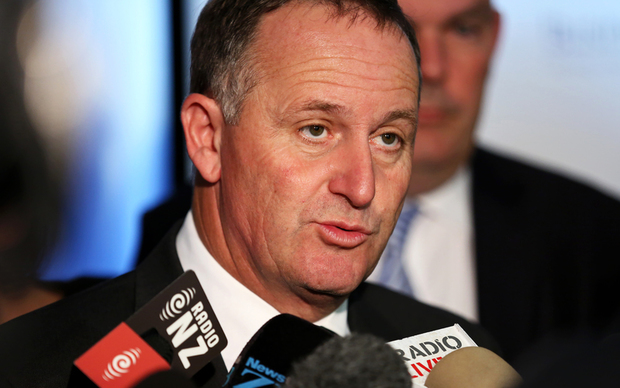 Waitresses working in central Auckland said they did not expect to be touched by customers.

One woman said "I don't think that's ok, I think that's personal space violation...I guess I would contact some kind of authority possibly... but first just my boss, saying this guy is physically attacking me in a sort of not very good way.

"It's a bit awkward though in this case because it's the Prime Minister, but you'd want to say something, you know."

Another waitress said there were many customers who played practical jokes, or overstepped the line of what was socially acceptable.

"But still I would be kinda shocked...in New Zealand in general, I think we're quite casual, but I wouldn't expect someone to break that physical barrier," she said.

"I would expect people to make jokes or be chatty, or maybe be a bit crude sometimes, but if it comes to touching, that's a bit far."

Another woman said she expected her customers to joke about.

"Obviously there's always the um, especially the older guys, that say something inappropriate," she said.

"Especially at our cafe, it's relay relaxed around here so I know my customers really well...so you just take it as a joke and get on with it. I've had a few inappropriate comments, but you just end up laughing with it...it's not offensive unless you take it offensively."

The National Council of Women said the Prime Minister's unwanted touching of a cafe worker highlighted how much sexism was a part of New Zealand's culture.

In an open letter to Mr Key, the Council for Women council said it was difficult for women to speak up when men's sexist actions appear well-intentioned .

It said sexist acts were behind statistics showing inequality in pay, violence towards women, and a lack of female leaders.

Some videos have also emerged, one of which shows Mr Key pulling a child's hair while she is being interviewed by broadcaster John Campbell.

The issue has been dubbed #ponytailgate on Twitter and has made overseas news with the BBC, New York Times and the ABC picking up on the story.