There is a simple reason why the public do not deserve to know whether the country's electronic spy agency in 2013 intercepted the communications of candidates then bidding to become the World Trade Organisation's director-general.

Critics argue it is not the role of the GCSB to help out a government minister's bid for a plum international job. Photo: Supplied

According to the Minister in charge of the Government Communications Security Bureau, Chris Finlayson, it is not in the public interest for the public to know. 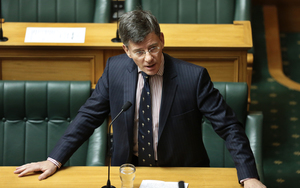 Mr Finlayson was questioned at length by Labour's David Shearer and the Greens' Kennedy Graham about disclosures in documents released by the American whistleblower that the GCSB had monitored the WTO candidates.

Presumably knowing what his competitors were doing might have helped Mr Groser's campaign.

But critics argue it is not the role of the GCSB to help out a government minister's bid for a plum international job. Even those who generally support the work of the GCSB say they would be disturbed if it had spied on candidates for the WTO job.

Both Mr Finlayson and the Prime Minister, John Key, refuse to say whether the GCSB engaged in such conduct. At the same time though they attempted to smear the reportage by saying it was either wrong or out of date.

Mr Key also made the point that none of what the GCSB had done was illegal.

Indeed the bureau's mandate is to spy on foreigners. All the other candidates for the WTO job are foreigners.

But if the GCSB did what the documents suggest, there are serious questions about whether it should be monitoring people not seen as a threat to New Zealand.

The GCSB's main role is to safeguard New Zealand's physical and cyber security. It also has a role to safeguard the country's foreign policy and economic interests.

Some officer at the bureau might have read that to mean helping Mr Groser's job application would be in New Zealand's economic interests. Just how is not so sure.

Whoever is the WTO director-general - and Mr Groser missed out on the job - is required to put aside any national interest. When former Prime Minister Mike Moore had the job in the early 2000s he did not spend his time promoting New Zealand's economic interests.

If the spying took place it is hardly likely to promote New Zealand's interests around the world.

Equally questions remain about earlier revelations that the GCSB conducted mass surveillance in the South Pacific and, as a result, would have picked up the electronic communications of New Zealanders living and travelling in the region.

The Inspector-General of Intelligence and Security, Cheryl Gwyn, says she will investigate complaints she has received about that matter.

Her inquiry might shed some light on the GCSB's operations, although it will not go into any detail that could compromise the work of the bureau.

The Labour Party has also complained about the latest disclosures so it is likely Cheryl Gwyn will also investigate whether the GCSB spied on the WTO candidates.

Until her inquiry or inquiries are complete the public will have to make do with public statements from Mr Key and Mr Finlayson defending the bureau's activities but without confirming or denying what it has done.

Most of the debate has focused on the civil liberty issues involved. Has the GCSB impinged on New Zealanders' privacy if their communications have been swept up in some form of mass collection of data?

What, too, of the WTO candidates and senior government officials in Pacific Island states and elsewhere who appear to have been subjected to electronic spying?

What threat were they to New Zealand or its interests?

This then raises further serious questions about the operation of the bureau. Journalists are repeatedly told it has limited resources, both in terms of money and staff.

If that is so there has to be a worry if it is spending any time or resource on the sorts of surveillance the latest release of documents suggest it does.

Is New Zealand's physical and cyber security being compromised by the GCSB failing to focus solely on potential and real threats?